Buffalo and San Diego State are in the best bowl game, the one which has all the potatoes.

Share All sharing options for: We love the Famous Idaho Potato Bowl

LET US NEVER FORGET: There is a bowl game between two college teams that rewards them for their regular season performance sponsored by, and named for, potatoes.

Yes, it's the Famous Idaho Potato Bowl, the bowl that sounds most like a horrible KFC dish, played on the blue turf of always-beautiful-in-December Boise, Idaho. Once known as the Humanitarian Bowl, the game that currently pits a Mountain West team against a MAC team had been sponsored by such relevant companies as:

I could not tell you what any of these companies are, and can only tell you what two of them do. (Namely, computers and truck stops, although I fear MPC is probably out of business.)

However, the bowl found a worthy partner in the Idaho Potato Commission, whose job it is to remind everybody that most potatoes come from Idaho.

This is the best thing, for these reasons.

Yes, I remember when my grandmother used to bake me a four-foot long potato that contained a stadium inside of it.

2. This giant potato outside the stadium:

The Great Idaho Potato Truck with a 30-ft-long Idaho Potato outside of the stadium. Perfect bowl name for this city. pic.twitter.com/y7swEWCLhW

3. The trophy is a bowl, which, in turn, is filled with potatoes: 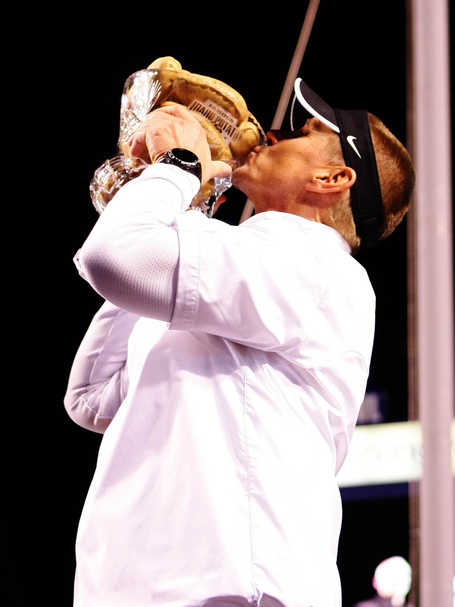 It is, in itself, a famous Idaho potato bowl.