There are better ways to express your frustration with a loss than saying something stupid on Twitter.

The weekend in social media started with a public relations hack saying something awful and racist ahead of her trip to Africa. It's ending on a similar note of poorly advised tweeting, courtesy of Washington State Representative Joe Fitzgibbon, an unabashed Seahawks fan who won't be welcome in Arizona anytime soon.

The Seahawks were upset Sunday afternoon by the surprisingly tough Arizona Cardinals. And it happened in Seattle, where the notorious 12th man has made an unwelcoming venue for visiting teams.

Seattle's loss didn't sit well with Fitzgibbon, who represents the 34th district which includes West Seattle. He took to Twitter after the game: 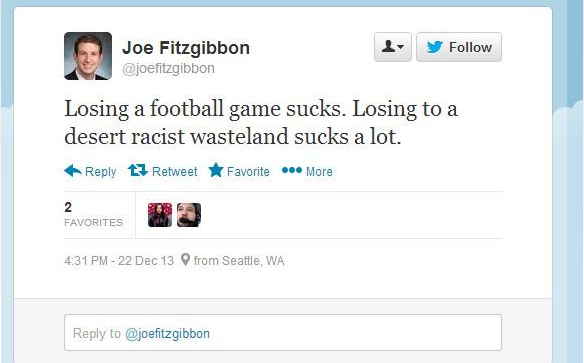 That tweet was deleted shortly after posting it, for obvious reasons. It was up long enough for two people to favorite it though.

There are better ways to pander than writing off an entire climatological region as racist.