Did you know that athletes enjoy holidays too? Thanks to social media, we know!

Christmas: It's not just for people who aren't good at sports!

The person most in the spirit was Trevor Romaine, Oregon State's kicker, who got to ding the ball through the uprights a few times while the Beavers beat up on Boise State:

Les Miles' Christmas was apparently as confusing as anybody else's Christmas:

Marco Belinelli made himself a really weird video of his head on an elf:

Beastie Boys: Solid Gold Hits. No need to open another present this year. Merry Christmas everyone.

Chris Webber in the holiday spirit:

Happy Holidays, I put this I my egg nog! http://t.co/y9DjMGSMBG

Cam Newton bought his teammates presents and signed them. Which is either really nice because it's increasing their value by giving them Cam Newton's autograph, or is really douchey because HE AUTOGRAPHED THOSE PRESENTS. Maybe he just wanted to tell them who it was from, but hasn't written his name in non-script in like, 10 years? Anyway, probably fodder for people who think he's SELFISH

Ugly Christmas Sweaters is a thing. 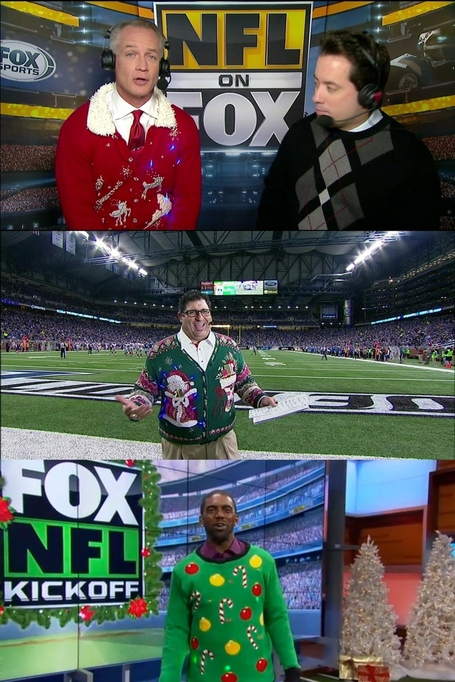 Chris Bosh is always slightly out of things:

Chris Bosh isn't phased by negative feedback, which is why he wore that sweater. #Heat pic.twitter.com/WcbAzxZ3dj

And Jonathan Papelbon is far too enthusiastic.:

We're gonna try and keep rounding stuff up through the day, so let us know if you see anything.