The weather outside is FOOTBALL

We love snow football. We think all football games should be played in some sort of cold precipitation, because it reminds us of one time of the year schoolyard touch football games turned into tackle football games with no major injuries. (Also, grit and miserable fans.)

However, there is altogether too much snow in Eagles-Lions, which is apparently being played in 20,000 B.C. 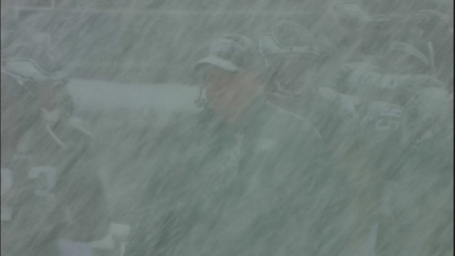 At one point, Ed Hochuli had to ask them to bring out the snowblowers since he couldn't see the goal line:

It sorta made football hard:

WHY ARE YOU WEARING A VISOR:

They needed to see where the lines on the field were. Luckily, we have technology for that:

AWWWWW LOOK AT THEM PLAYING 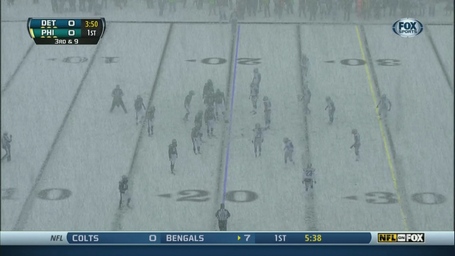 There was so much snow the Eagles went for it on fourth-and-7 from the 10-yard-line:

The Eagles' cheerleaders are powering on through. Bravo, ladies. pic.twitter.com/X5YrR3ZnCX

That shot of the FOX cameraman in Philly is amazing. pic.twitter.com/TTQCkUtl0p

IT'S EVEN MAKING MEGATRON MALFUNCTION 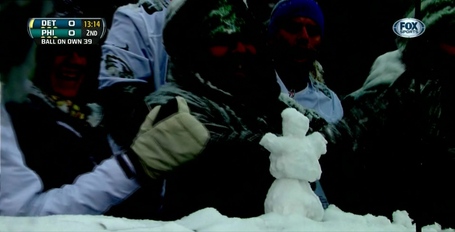 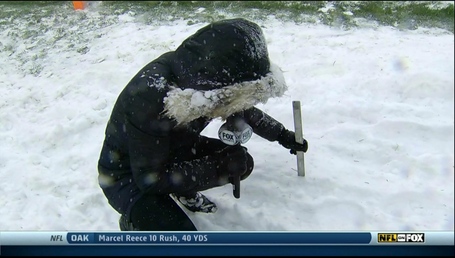 The parts of the field that people ran on got cleared off. The end zone, not so much:

Other games were also snowy, but not as snowy:

It made it easy to see how bad the Redskins were at offense:

@dcsportsbog no footprints on one side of the field ..... pic.twitter.com/V6DfzR4hGl

Running is hard, too (Gif via Kissing Suzy Kolber)

This is how Ravens CB Asa Jackson warms up in a snowstorm. Apparently. pic.twitter.com/X49ypZrtBZ

Watching NFL RedZone was like having your TV flash between hi-def and standard, as the scene shifted from blizzards to normal, sunny days in Tampa Bay and whatnot.

The best images of the day, though: