Stanford is slowly eliminating all non-offensive line positions from football

Stanford has started working on a set with nine offensive linemen and two other players. How much further can they go?

Share All sharing options for: Stanford is slowly eliminating all non-offensive line positions from football

Stanford's never been shy about their offensive M.O. under Jim Harbaugh and David Shaw: taking as many of their talented tight ends and offensive linemen, jamming them together near the line of scrimmage, and physically out-muscling the opposition. But even so, we didn't expect anything as extreme as the formation unveiled in this video (at the 2:00 mark)

That's right: one quarterback, one ballcarrier, and NINE OFFENSIVE LINEMEN:

We imagine this is for goal line sets, but most teams at least pretend they're going to do something besides jam it down your throat. With talented linemen like David Yankey up front, though, they might not need to. Coaching Search captured the quote from offensive line coach Mike Bloomgren:

Someday, Shaw will figure out how to play 11 linemen simultaneously with nobody else on the field. In fact, perhaps he already has: 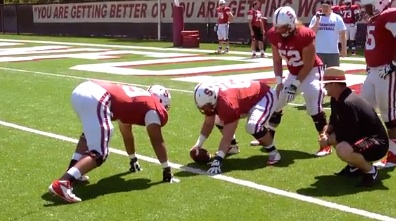 Is this really just a cutblocking drill, or is it actually a hint of a new formation where backup center Graham Shuler lines up as the team's QB? We'll just have to wait and see.