Thousands of people waited in crazy lines for Mariano Rivera bobbleheads ... so they could put them on eBay.

The Mariano Rivera farewell tour continued at Yankee Stadium with a bobblehead giveaway. But the dolls' late arrival caused ABJECT HORROR at the stadium as tens of thousands people wanting collectible toys had to scrap and claw to get their hard-earned prize (which they could then sell on eBay.)

The bobbleheads were supposed to go to the first 18,000 people at the stadium, as they entered, all orderly-like. But that hit a logistical snag:

On Monday, on the trek from Seattle to New Jersey, there was a train issue in Chicago that disrupted the first leg of the journey for the 18,000 little Marianos. Still, the Yankees were hopeful the figurines would show up on time. On Tuesday, a truck that was scheduled to make the final delivery to the Bronx suffered a hydraulic problem, causing a further delay and forcing the Yankees to make a decision.

The Yankees decided to wait on the arrival of the bobbleheads to start letting people in the stadium, but this caused huge crowds of people who had hoped to get there early enough to get a lil Mo:

Bobblehead panic starting to set in at Yankee Stadium. Gates not open yet. pic.twitter.com/WjrfzALq9W

The crowd outside Yankee Stadium, where there aren't Mariano Rivera bobbleheads and fans are getting vouchers instead pic.twitter.com/WXhuquFGlW

They printed up vouchers and let people in:

But when the toys finally came, the lines to pick them up weren't as orderly as the ones entering the stadium might have been:

Just look @ this sea of humanity to get Rivera Bobblehead. #YANKEES pic.twitter.com/RjzA5c0j1P

The line for bobbleheads stretches from the main level up TWELVE ramps nearly to the upper deck. MAJOR failure by the @Yankees.

Rays announcers are now laughing at the bobblehead situation.

Why would people go to such horrible lengths for a toy? Here's why: 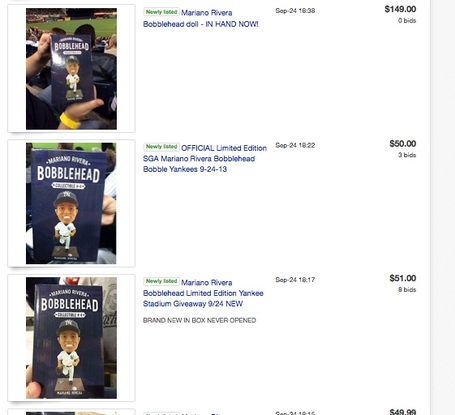 Yup, that's people uploading their Rivera bobbleheads to eBay FROM the stadium, and asking more than $100 for them. The Yankees lost, 7-0, so the fans who left their seats early missed nothing. In fact, they got a quintessential 2013 Yankees experience:

Sounds like the Yankee Stadium bobblehead experience tonight has been a failure from start to finish. Fitting for 2013.