Marshawn Lynch caused yet another earthquake during Seahawks-Saints

The Seattle Seahawks' fans keep shaking the earth when Marshawn Lynch does stuff.

Share All sharing options for: Marshawn Lynch caused yet another earthquake during Seahawks-Saints

You know about Beast Quake. 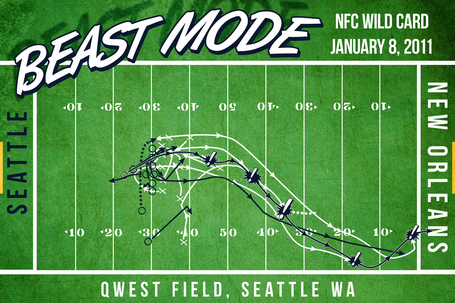 You might have also known that during this year's first Seahawks-Saints matchup, the Seahawks fans caused another earthquake.

Well, during Saturday's Seattle-New Orleans Divisional round game, Qwest Field once again made the ground shake. Seismologists put additional sensors around the stadium -- for practice observing earthquakes and to study how large structures shake -- and sure enough, they got the results they wanted when Marshawn Lynch sealed the game again. From the Seattle Times:

"This signal looks bigger than the one three years ago," said John Vidale, director of the Pacific Northwest Seismic Network at the University of Washington, "but we don't know yet."

Seismologists will need a few days to be sure, he said.

A) We need sensors on every stadium in the league. We need to know who our most seismically active fanbase is. We can detect our loudest fans with a simple decibel meter, but we need this technology to find which of our fans jump -- and, umm, weigh -- the most.

b) All three Seahawks quakes have been caused when the team is playing against the Saints. How do we know this is due to Seattle's fans? Maybe it's just Rob Ryan angrily stomping after his team's failure?

c) You can check out all the sensor activity from the game at the PNSN site.

2014 NFL playoffs, Saints vs. Seahawks: Seattle hangs on to advance to NFC Championship