We owe Cellphone Guy a world of thanks for saving us from an image of Andrew Luck's butt.

Colts punter Pat McAfee -- yes, he of the huge tackle, miracle broken play punt, and Breaking Madden episode -- wanted to show the world what the locker room was like after the Colts' 28-point comeback victory against the Chiefs.

Unfortunately, he pointed his camera in the wrong direction: towards Andrew Luck's locker: 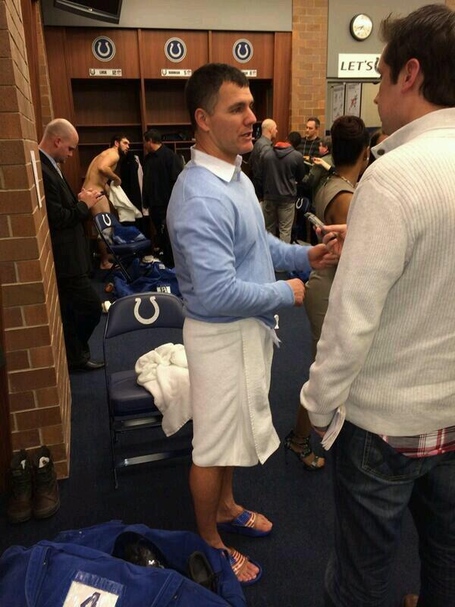 Miraculously, we were saved a picture of Andrew Luck's butt by Cellphone Guy, who was perfectly placed in exactly the correct spot a la Austin Powers gags. This is literally the closest to nudity we are comfortable with showing you on this site. If his hands move inches in either direction, this is NSFW.

However McAfee was still reasonably embarrassed by the tweet, and deleted it.

Oh boy.. Half naked Andrew in the back of that last one.. He looked damn good though

Better luck next time, everybody who wants to see a bearded QB's butt.