It is extremely cold in Green Bay

Share All sharing options for: It is extremely cold in Green Bay

HOW COLD IS IT?

So cold that even Wisconsinites -- who would brave hail, sleet, snow, and zombie outbreak for booze -- aren't drinking heavily four hours before the game.

Thought I'd show up 4 hours before game time and ask people why they would tailgate in these conditions. What I saw: pic.twitter.com/2AGfZRrTPu

Surely, the Packers fans will show up. They'll drink. They'll fill -- or come close to filling -- Lambeau Field, even though it's damn near Arctic. But even this level of drinking indifference is a surprise.

So cold that the "grass" is not even remotely that anymore:

View from the @RingCentral broadcast booth at Lambeau Field. Absolutely no green on the field. @KNBR @1077TheBone pic.twitter.com/IhS6AJG7Zc

Just millions of blanched corpse-blades. AND YET:

A few 49ers going through early warmups at Lambeau Field. And yes those are shorts. pic.twitter.com/PPetjQC9Eo 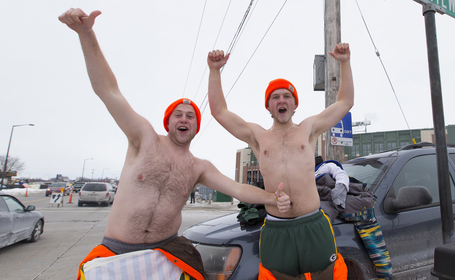 PUT SOME DAMN PANTS/SHIRTS ON.

So cold that ski/pimp garb is a perfectly reasonable outfit to be wearing: 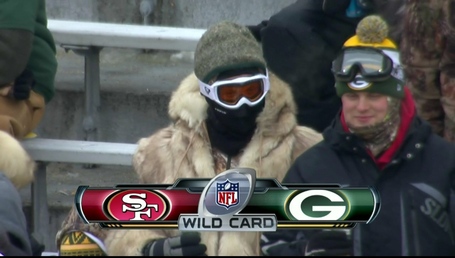 ... although, based on their peers' behavior, those guys might very well be pantsless.

So cold that you have to grill your beer to make it merely cold instead of frozen solid: 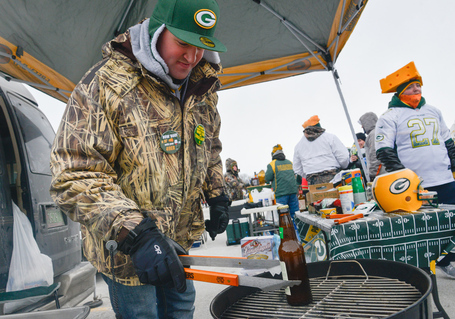