Inside Ric Flair's betrayal of the Panthers

Share All sharing options for: Inside Ric Flair's betrayal of the Panthers

Ric Flair is kind of a big deal in the Charlotte area. The former WWE superstar locked the figure four on the city's heart long ago, and since has become a rallying cry for professional sports around the state.

Don't believe us? Check out how the Carolina Panthers have been celebrating all season long.

Then something happened. The Panthers never should have trusted "The Dirtiest Player in the Game." Flair took a heel turn and flew to Green Bay to motivate the San Francisco 49ers before their playoff game.

This was a man who was the source of an online petition so he could be put back on the stadium Jumbotron. (via @billvoth)

HOW COULD YOU NAITCH?!

Naturally folks in the Carolinas were a touch upset with their prodigal wrestling son.

Initial reactions on Twitter were harsh. Some refused to believe in the betrayal. 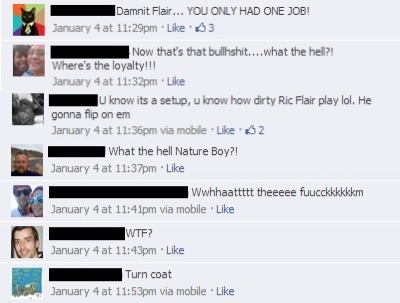 The Panthers play the 49ers in the playoffs and suffice it to say, he's got a few fans to win over if he intends to watch the game at Bank of America Stadium.

Moreover, it appears the players are well aware of Ric's turn -- and they're none too pleased.

Started asking Drayton Florence about Ric Flair, he interrupted saying, "I’m not talking about that" and turned away. A team spurned?