The Pelicans are remaking their terrifying mascot Pierre, wrote a silly press release about his 'injury'

The MurderPelican is going to be looking less murder-y. New Orleans even busted out a story about its mascot getting hurt in a pickup game.

Share All sharing options for: The Pelicans are remaking their terrifying mascot Pierre, wrote a silly press release about his 'injury'

UPDATE: The Pelicans fleshed this out with video of the accident:

And an injury report: 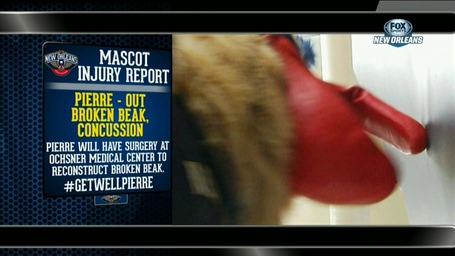 Ever since the day he was introduced, people on the internet have known Pierre the Pelican was the most terrifying mascot ever to exist.

The brilliant netw3rk summed it up:

I will never forget the moment I first set eyes on the horrifying visage of Pierre the Pelican. The picture popped up in my Twitter feed: the glassy, soul-dead eyes; the gaping, hungry beak exposing a matching blood-red tongue; the feathers the tawny yellow of a urine-soaked rag;

Anyway, due to the widespread criticism, and one would assume also due to the screams of area children, the team decided to remake the mascot. From NOLA.com:

A team source said there will be a redesign of Pierre's head. "Any good ornithologist (zoologist who studies birds) will tell you that a young Pelican is constantly evolving!" said a team source, who has knowledge of the planned redesign.

It appears that's in the works, but the way the team is announcing it is PREPOSTEROUS:

The injury occurred late in the pickup game as Pierre drove to the basket and was fouled by Grizz on the play. He sustained a broken beak after running into the padded stanchion on the goal.

"This will be a rather unconventional surgery for us. I am not sure we have something to compare this to," said McQueen. "It will be quite complicated and will require the use of some unconventional tools and instruments to reconstruct his beak."

They even have a quote from the Curator of Birds at the Audubon Zoo. I suppose this was the wise way to do it, instead of just saying "well, everybody hated it and children throughout the New Orleans metropolitan area were haunted by horrific nightmares," but it still looks pretty silly.