One Olympian found the puppies of all those stray dogs roaming around Sochi.

UPDATED, Feb. 17, with the tale of Kenworthy's adoption struggles.

Anyway: US slopestyle skier Gus Kenworthy found one of those dogs' stray puppies. (incidentally, also via Deadspin, who are owning the puppy beat)

Oh my glob, look who I just found! :) #sochistrays pic.twitter.com/ne66y7jN6Z

Then he found more of their stray puppies.

Kenworthy is doing his best to take care of 'em:

Also, for the people wondering, I've lined up kennels 4 the pups & made vaccination appointments. Doing all I can to bring them home w/ me!

That said, if you've been one of the people who has seen all these adorable puppies and has read one of the (multitudes) of stories about how to adopt Sochi puppies and feel inspired: it's really sweet that you want to help out a puppy in need, but we promise there are adorable puppies at a shelter close to your home. They're as cute and need a home just as badly as the dogs on the other side of the world. Not to mention it will be much easier and significantly cheaper. So maybe do that, although, oh no, you don't have an exotic puppy backstory.

UPDATE: Kenworthy delayed his homecoming to Colorado to figure out his puppy situation:

Kenworthy wasn't kidding. He is taking all five dogs back to the U.S. with him, but getting the paperwork done is taking some time. A U.S. skiing official says Kenworthy had to push back his plans so the dogs can join him for the long trip halfway across the world back home. ... Kenworthy said family members back home are already lining up to adopt. "I'll keep one for myself," he said.

You almost definitely want to watch the video where Kenworthy explains his puppy situation to Rachel Nichols, if only for this still: 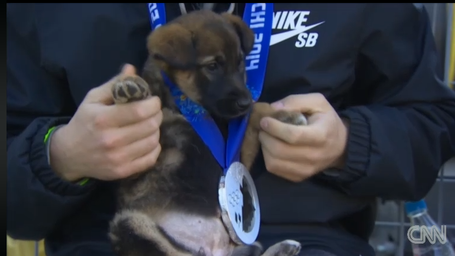 Kenworthy explains that "Silver" is still in the running for a dog name. Although to be fair, we kinda beat him to this one: 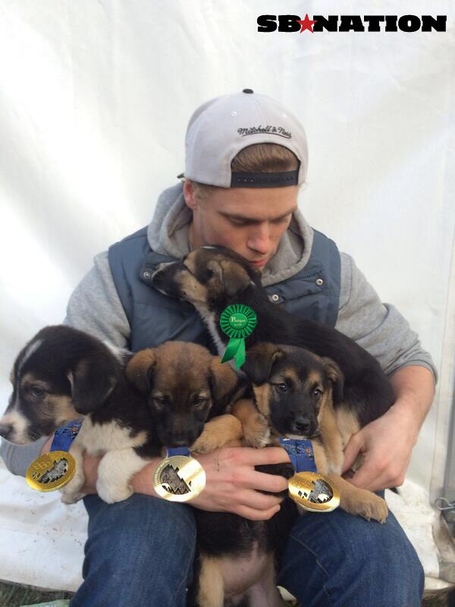