Share All sharing options for: Bradley's new mascot is a horrid gargoyle

Bradley University, home of the Braves, hasn't had a mascot in a while. They got rid of a Native American mascot in the early '90s, switching to a Bobcat mascot that was quickly abandoned. After extensive brainstorming and surveying, they've introduced a new mascot. It is a gargoyle, and it rivals Pierre The First in horror. Here's the release, which includes this video introducing Kaboom the Gargoyle:

Some notes about this:

- "Kaboom!" is the signature call of Bradley play-by-play man Dave Snell. Kaboom is a gargoyle because there are gargoyles atop the Bradley alumni center. Definitely didn't have a thing to do with "Braves". 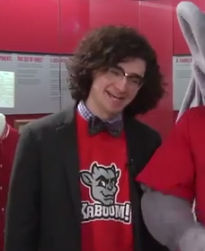 He has a doctorate.

- There is apparently a Gargoyle word for "hashtag"

- They've already let him near children:

I don't trust that gargoyle.

(Thanks to Ryan Learned for the tip)