A Twitter troll called out Richard Sherman for getting injured while winning the Super Bowl. Sherman pointed out that, uh, HE WON THE SUPER BOWL. And that person had to delete their Twitter.

I'll never understand the minds of people who go out of their way to tweet mean things at athletes. The best case scenario is the athlete reads it and ignores it, like the thousands of other things people write to them on the Internet on any given day. The worst case scenario is ... well ... I guess this.

Somebody whose Twitter name was an asterisk who appears to spend most of their time tweeting about episodes of General Hospital -- still on the air! In 2014! -- had some not-so-nice things to say to Richard Sherman after the Seahawks won the Super Bowl.

@RSherman_25 Everyone who heard you dissing Manning before knows you don't mean a damn word of this, you pathetic, disingenuous punk.

A thug if you call out your opponent, a disingenuous punk if you say they're a great competitor. Okay then!

@RSherman_25 Take your phony praise and shove it up your drugged out ass, you worthless scumbag.

@RSherman_25 Seattle beat Denver, but you contributed nothing and got carted off with an injury. Karma's a NASTY bitch, needle Dick! :P

This seems like what we in the industry call "a bad person" (technical term.) I can't imagine deriving pleasure from typing these words into a phone or computer. But * is one of thousands of people who seems to do such a thing.

Despite having 800,000 twitter followers now that he's an Incredibly Famous Football player instead of just a Famous Football Player, Sherman's been taking time to check his mentions: 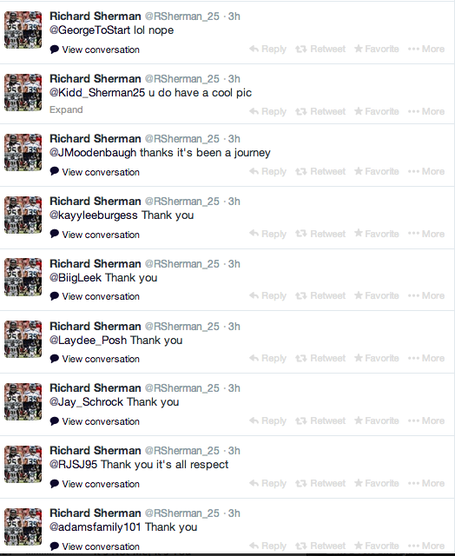 So he saw this, and responded in the best way possible:

Karma was such a NASTY bitch to Richard Sherman -- err, needle Dick Sherman -- that he ended up with the Super Bowl title. If only karma would be such a bitch to my preferred football team one of these decades.

As of Wednesday morning, *'s account is no more, wiped off the Internet eternally out of shame. Apparently, they couldn't take the heat of having people say bad things to them on the Internet. Strange how that works out. In other news, stay out of your kitchens, people who struggle with heat.