Jonny Gomes will never, ever regret this tattoo

Share All sharing options for: Jonny Gomes will never, ever regret this tattoo

How sick is this?! pic.twitter.com/ADLNlj0q2q

Pretty sick, alright. I just spent five minutes looking for a belly button. How's your day going? But I think it's a back. It's a hideous Red Sox gnome riding a land-boat, holding a trophy. A poor, misshapen gnome. If his arm is that big, and it's coming out of a beard ... aw, the poor little feller. Here's what his body must be like: 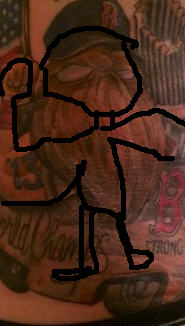 I guess that is ... something. It's commitment! How about that tattoo, mmm-mmm. At least the fantastic-looking dog will make up for a lot of regret. Also, the SB Nation tattoo right above the gnome-ship is outstanding.