Lil B is once again angry at Kevin Durant, a happenstance which has major implications on Oklahoma City's title hopes.

Share All sharing options for: Lil B's classic feud with Kevin Durant is once again active, including diss track

UPDATE, MARCH 11: Kevin Durant claims NOT TO KNOW WHO LIL B IS:

Asked KD about Lil B: "I don't know who that is ... I guess he needs attention ... whoever that guy is, he needs some help."

Personally, we think the one who needs help is Kevin Durant: he's been inflicted with the Based God's Curse, and he doesn't even know who the Based God is. To rid himself of this dreaded affliction, he'll need to get on Lil B's good side, and this is certainly not the way to go about doing that. (Also, bless the good soul who asked Kevin Durant about Lil B.)

ORIGINAL POST: A new leaf has been turned in the epic feud between Kevin Durant and Lil B, the superstar NBA player and the rapper who is convinced he is a superstar.

If you don't remember, first Lil B parked his car Lil B tweeted this in May 2011: (via Complex) 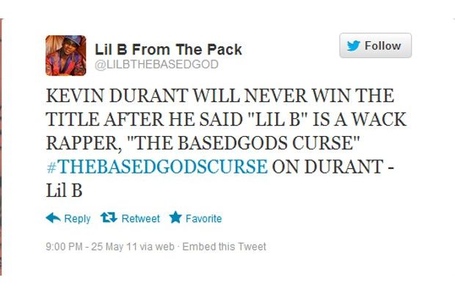 However, ever compassionate, the Based God would relent that June. 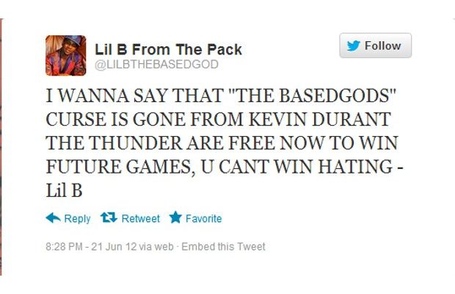 The Based God is ever merciful.

Somewhere along the line in August of 2012, Lil B decided he wanted to play Kevin Durant in basketball: 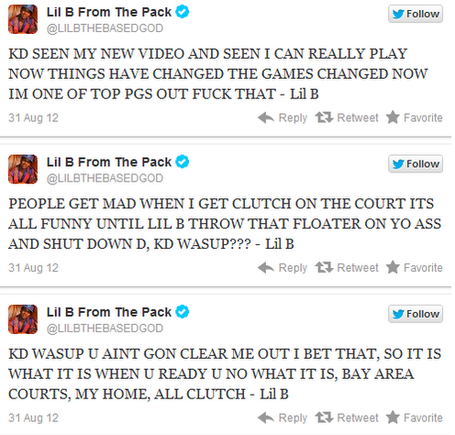 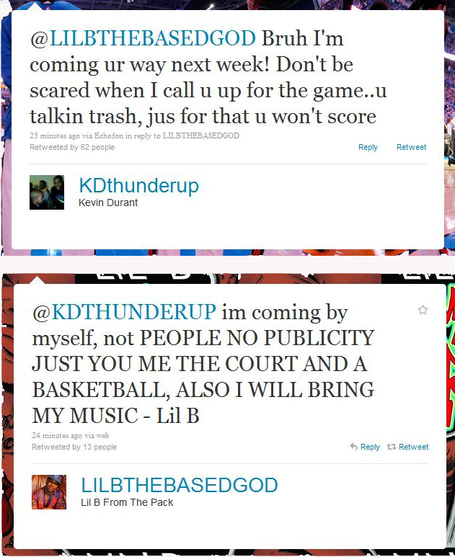 They never played, but Lil B did try out for the D-League. Personally, I think a freestyle battle would be much closer. Velvet Hoop!)

And there were also sometimes random strings of one-sided tweets by Lil B: 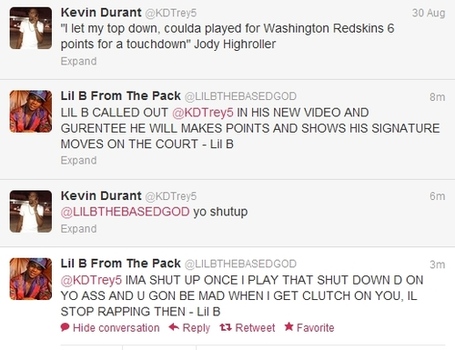 There was no real interaction between the two for a while, but in the last few weeks, the hatred had intensified on B's end. During the All-Star Game:

AND FUCK KEVIN DURANT LIL B FOR LIFE - Lil B

And tonight, as Durant posted 42 points on just 20 shots against the Sixers:

To many, the Thunder are the No. 1 contender to knock off the Heat after two straight titles for LeBron James and crew. However, you'd have to be crazy to continue to believe the team could win a title in spite of a potential "BASEDGODS CURSE." We saw the potency of the "BASEDGODS CURSE" three years ago, when the Thunder fell to the Mavericks in the Western Conference Semifinals.

However, the question is whether Lil B has, in fact, cast the "BASEDGODS CURSE." He's certainly cursing at Kevin Durant -- and somebody named Kevin Derant -- but it's unclear whether this officially counts as levying of the dreaded spell.