He botched a lot of easy ones. This is hard to watch.

Let's walk through this, shall we? This video starts with its most upsetting moment. Julian has gotten a few letters in a row, he's holding the million-dollar wedge, and this is like a one-inch putt. 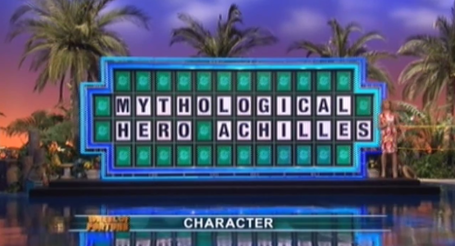 The fact that he got this far means he obviously knows the answer, but you know how every once in a while, you realize you've read something many times but never heard it out loud, or never made the connection between word and sound? Julian had this moment on national television with a potential $1,000,000 at stake.

And then there's this one.

Julian had just picked up both 1/2 car tiles (his spins were crazy lucky), so maybe he had the word "car" rattling around in his head and it just overrode the category? Either way, he picked "C" here even though it couldn't have been "CAR" or, I don't know, "CAT," because "R" and "T" were already on the board. "CAB"? Julian messed up. Indiana University officials were at home like "TAKE THE SWEATSHIRT OFF TAKE THE SWEATSHIRT OFF DAMMIT DAMMIT." 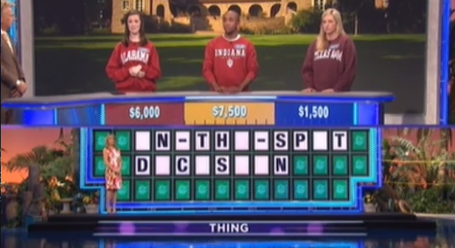 Julian won and made it to the bonus puzzle even after Laura and Shelby rebounded all his misses, by the way. You can see a longer version of his performance here.

(via Chad Mosher via Deadspin)