So this is a bit old, but we're just seeing it now, thanks to Yahoo!'s Dirty Tackle.

The San Antonio Scorpions of the NASL have existed since 2011, but for a long time, they didn't have a mascot. That ended this Saturday during their game against Minnesota United, and the way they unveiled their new mascot was pretty ridiculous.

So it was revealed that the Scorpions would be revealing their mascot, thanks to stuff like this: 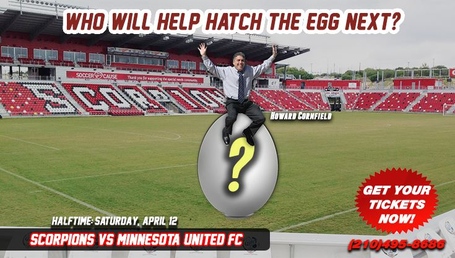 You'd expect the team's mascot to be a scorpion, but apparently, this mascot is coming from an egg. But scorpions are viviparous, which means they don't lay eggs -- the young develop inside the mother's abdomen. So, whatever it is, not a scorpion.

At halftime of the game, a Humvee surrounded by camouflaged soldiers wheeled out the egg: 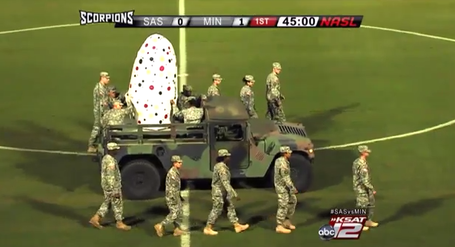 Why? Are these real soldiers, or actors paid to dress up as soldiers? And either way, why would troops need to be involved in egg-wheeling? Is the animal inside so dangerous that military personnel need to handle it?

Regardless, we have an egg. A giant egg, shaped like a cylinder rather than an egg, speckled like a Wonder Bread package. And it's split down the middle: 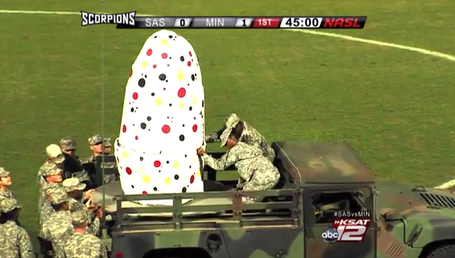 The egg is placed at midfield and begins shaking. The baby inside begins to break through: 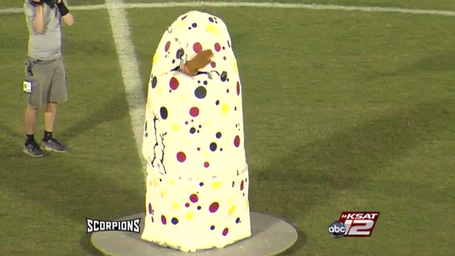 The tension is building! It is, as the announcer notes, egg-citing! 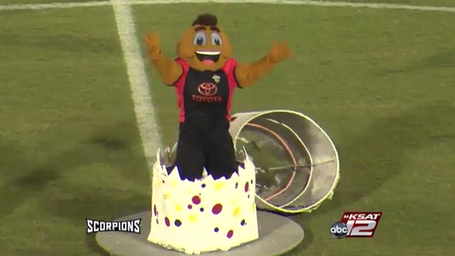 (even though scorpions don't lay eggs)

Then again, why nit-pick: Scorpions also don't do the Moonwalk 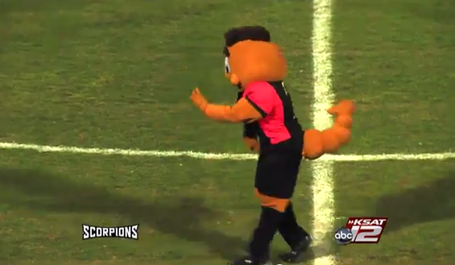 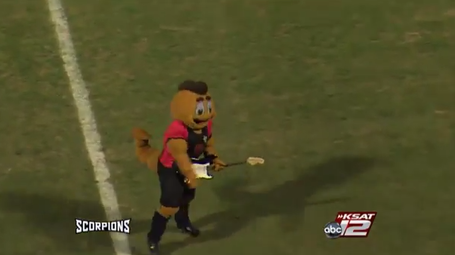 Or cheer on soccer teams. So maybe we're the jerks for demanding authenticity. Best of luck to the mascot, who still is as of yet unnamed. (We're hoping for Pinchy.)