It's time for Phil Jackson to hire a coach. Unfortunately, his wild success on the bench didn't translate into much fruit on the old coaching tree.

Share All sharing options for: The Phil Jackson Coaching Tree is every bit as tragic as you'd imagined

Phil Jackson canned Mike Woodson on Monday, which means that the New York Knicks are looking for a new coach. General managers often like to hire from within their own basketball families. See: basically every Spurs-bred GM hiring a Spurs-bred coach.

But there's an inherent problem in that for Jackson. Unlike the Popovich/Buford Tree, which has bore a ridiculous amount of fruit, the Phil Jackson Coaching Tree is covered in poison ivy. Take a look. 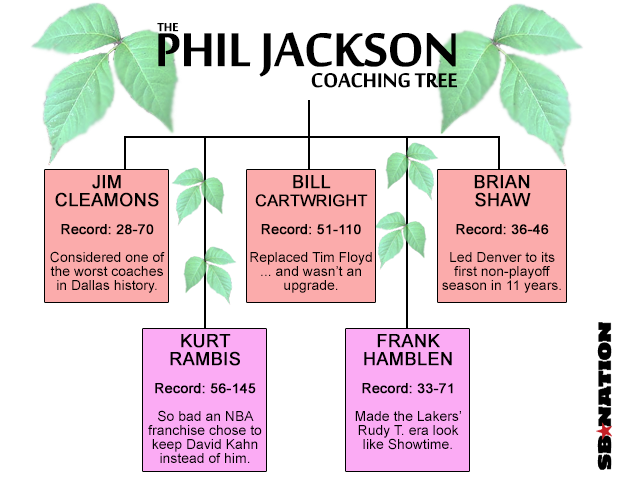 At least before Brian Shaw got the Nuggets job the Phil Jackson Coaching Tree still had hope. But after Shaw's unimpressive debut season, we're left wondering why in the hell the Zen Master can't get his acolytes into a good professional situation. Is it because he's such a maverick among coaches and only worked under two GMs? Is it because the Triangle is too hard to implement without the force of Jackson behind it?

It's a mystery we may never solve. In the meantime, AVOID AVOID AVOID.