The Clippers will play Sunday, but they're still sending a message.

We all wondered how the Clippers would show their distress over the uncovered tapes of Donald Sterling's racist comments. After it became clear they weren't going to boycott any games, attention turned to how they might express their team-wide contempt on the floor. Here it is:

I'm hearing Clipper players will be turning their team-issued gear inside out (except for uniforms) for all of Game 4. #DonaldSterling

The Clippers have turned their shirts inside out and are warming up in generic red shirts. pic.twitter.com/dUST40wBaO

#Clippers run out onto court, huddle up and remove their team issued gear, now all wearing red climalites inside out pic.twitter.com/JhhnUg3zpg

The Clippers took off their shooting shirts and dumped them at center court. pic.twitter.com/Nod5QWsWJy

Dropping the jackets and going with blank/inside-out warm-up shirts is about as much as the team can obscure the Clippers emblem without breaking league rules (they almost certainly can't mess with their jerseys during the game). It's a small thing, but it sends a message to the man who owns their organization but clearly isn't on their side.

Tom Ziller: The Clippers owner is still a scumbag

Update: During the game, the Clippers went with black socks and arm bands: 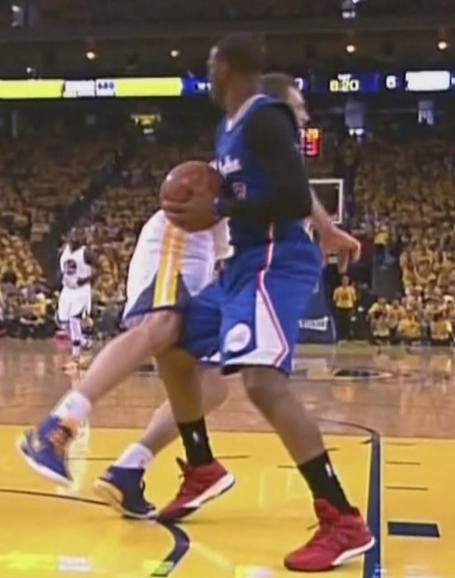 Update: Monday night, the Heat repeated the Clippers' warm-up move, removing their sweats in unison and dropping them at center court as a show of solidarity: