There are homer announcers on two stations that are supposed to be homers. People on the internet are BAFFLED by this phenomenon.

Share All sharing options for: The team-specific Final Four announcers on TBS/truTV made some people angry

Turner Sports/CBS had a rather awesome idea for the Final Four: one channel has Jim Nantz, Steve Kerr, and Greg Anthony calling the game -- you know, as always -- and one channel is equipped for fans of the individual teams. For example, for Wisconsin/Kentucky, there are Wisconsin-specific announcers like Wayne Larrivee on truTV and Kentucky-specific announcers like Rex Chapman on TBS.

People on the internet did NOT understand this phenomenon: 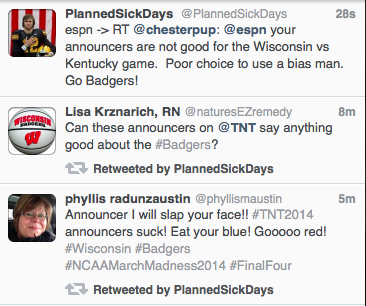 Charles Barkley had his say, calling these idiotic people... well, he called them idiots.:

Lotsa Bo Ryan cutaways on TruTV teamcast.Coach Calipari is virtually invisible.Wildcats teamcast reading Tweets from past KY stars: not 4 me

#trutv terrible coverage and announcers. And what's with the 18 shots of Uconn coach and not one of FL?

i must be watching a local Kentucky station....

@gretawire The guy on #TNT just said he's getting so many tweets about him being biased. He admitted he's a Wildcat fan.

@TNT your commentators for the second game are biased. Nothing good to say about #Badgers

If you are a #Badgers fan turn it to TNT, TBS announcers are crap. #OnWisconsin

We get It CBS/TNT you want Kentucky. Go Bucky!!! #FinalFour #Badgers

Chapman and bromley need to shut their blue Kentucky mouths! You do not know how to announce! #tnt #NCAAMarchMadness2014 #FinalFour #Badgers

Maybe TNT could show the #Wisconsin bench after the Badgers score.

Can these announcers get any more biased for Ky.?! #TNT #FinalFour #Badgers

TNT coverage of the Final 4 is horrible. Rex Chapman, is rooting, on air, for the frickin' Wildcats! He should be yanked. On Wisconsin!

#tntfinalfour the broadcast is bull s#!t. It's the Kentucky show. Sorry Wisconsin TNT doesn't know your team is playing too. GO WISCONSIN.

TNT is all over Kentucky's nuts. They have yet to talk about anything to do with Wisconsin. Isn't Wisconsin winning?

Watching TNT coverage of Wisconsin & UK. Apparently Wisconsin did not show up, cuz not one word about them I past 5 minutes. All UK.

Even Detlef Schrempf couldn't figure it out!

Is it just me or is somebody announcing the Kentucky vs Wisconsin game not quite objective? Come on TNT.

The vast majority of these, as you'll notice, are people on TNT that should be on truTV, rather than the other way around, because, well, nobody knows where/what truTV is.

But of course, the capper: PEOPLE WHO WANTED THE BIG BANG THEORY