And the money's going to a good cause!

Share All sharing options for: Rihanna broke a phone at a Clippers game, now it's worth $66,500

I've always been fascinated by celebrity as currency. Simply with their presence or their touch, extremely famous people can create monetary value out of thin air. For example: Rihanna was at a Clippers playoff game last week and agreed to take a photo with a seat neighbor's phone. She dropped the phone and it smashed. End of story? Not at all.

The man whose phone Rihanna dropped was L.A. Police Commission President Steve Soboroff, who shrewdly asked Rihanna to sign the busted phone, then auctioned it off on eBay... 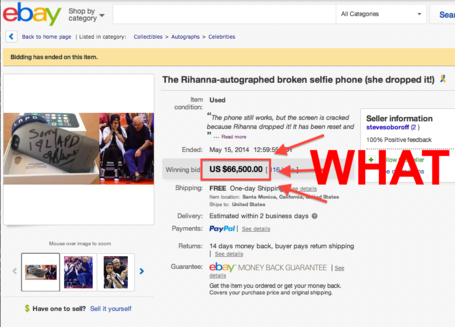 ...where, as you can see, the phone sold for SIXTY SIX THOUSAND FIVE DAMN HUNDRED DOLLARS. That is insane. A $200ish item dropped and autographed by Rihanna is worth as much as, like, a luxury midsize SUV.

But hey, really happy ending to this one: Soboroff is donating all the money to the LAPD Cadet Program and Rihanna chipped in $25,000 of her own money (real money, not like a Ziploc bag of air she breatehd because she is Rihanna and she can create money) as well. Cool all around. Strange, but cool.

Here's the photo, by the way:

Thanks @rihanna for supporting @LAPDHQ. pic.twitter.com/DhG3FagDSo

via LAist via New York Magazine