Plenty of NFL-licensed apparel is ugly. These sweaters are at least ugly on purpose.

Share All sharing options for: We've waited too long for NFL Ugly Sweaters

First things first: the NFL has been making ugly officially licensed apparel for years. During the 1990s, the league sold supremely hideous sweaters, for like $100, that were made out of the same material as fireproof blankets and cut to fit no human body that has ever existed. The league even made trading cards showcasing these (horrible, horrible) clothes. Ugly NFL apparel is decidedly not a new thing. But these NFL Ugly Sweaters from Forever Collectibles -- which are officially licensed, and ugly on purpose -- are a new thing.

The NFL Ugly Sweaters are a fairly reasonable $59.95 before shipping, and presumably made of wool or a wool-like substance. They are also, as advertised, pretty terrible looking! The Arizona Cardinals model, for instance, looks like a defective family crest. If there is a House Of Darnell Dockett, this is the flag that flies over its castle: 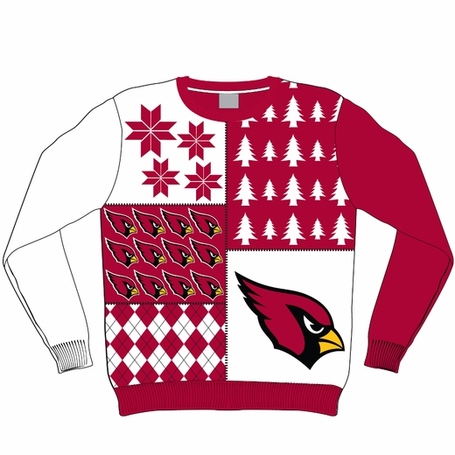 That style, which is quite accurately labeled "busy block," is not the only motif. It is still somehow less difficult to stomach than the "wordmark" look. The Cincinnati Bengals sweater in that style, for instance, could be described as "Explosion At The Zoo." 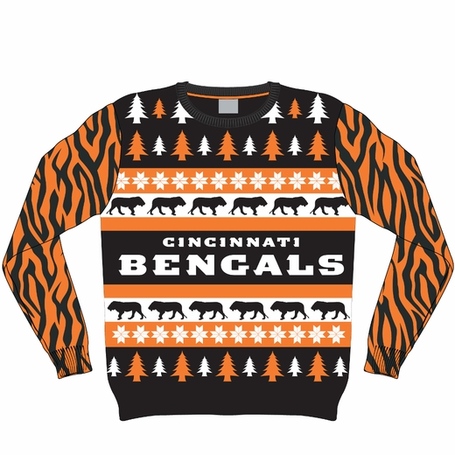 Of course, as demonstrated by the 100 percent unretouched photo of Johnny Manziel above, it is possible to pull off the NFL Ugly Sweater look with a bit of moxie and the right fit. If you want to get a jump on next winter's Ugly Sweater Party shopping and can't bear to attend said party without wearing a garment that is 1) Kansas City Chiefs-themed and 2) looks like a package of hot dogs, then you're in luck.