Julia Collins is a 'Jeopardy' legend with a historic streak

A timeline of the historic 20-game streak.

Share All sharing options for: Julia Collins is a 'Jeopardy' legend with a historic streak

This has been a big year for Jeopardy. Before the epic Battle of the Decades, Arthur Chu captivated everyone with his dominant, strategy-heavy 11-game run. It felt like everyone everywhere was talking about that streak.

Despite SEVENTEEN straight wins and almost $400,000, Julia Collins hasn't gotten the same attention, so I guess this is me just dropping in to say YO JULIA COLLINS IS CRUSHING FOOLS PAY ATTENTION. Perhaps Collins hasn't made as much news because she's neither as entertainingly impertinent nor as scheming as Chu was, but she's already blown by him in terms of historic winnings. She's deft with the buzzer and knows absolutely everything. I swear she doesn't have a weak category.

This is how things looked at the end of Monday night's Double Jeopardy: 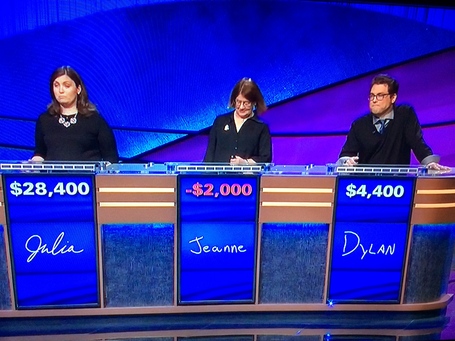 Jeanne wanted out of there so badly she figured she'd better just lose money. And here's Julia feeling good after making an unnecessary but correct wager/answer in Final Jeopardy: 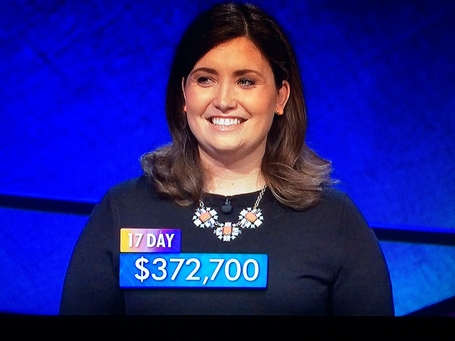 17 days. $372,700. She's comfortably in third all-time in non-tournament winnings and consecutive wins and rapidly approaching Dave Madden for second place. If she keeps it up, only the monumental benchmark that is Ken Jennings' 74-win streak will stand in her way. Oh, and she had her shot called years ago:

Found: 8th grade yearbook predictions! @JeopardyJulia & I are both on track. pic.twitter.com/IEkdZUEMNK 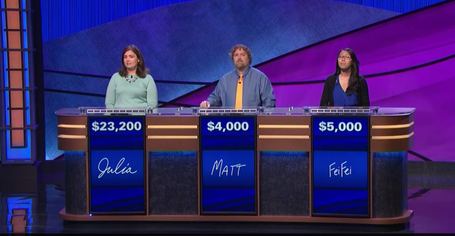 ...and only lost a bit in Final Jeopardy, leaving her just $20,000 short of second-place all time on the winnings list with a nice, round 20-game streak on the horizon: 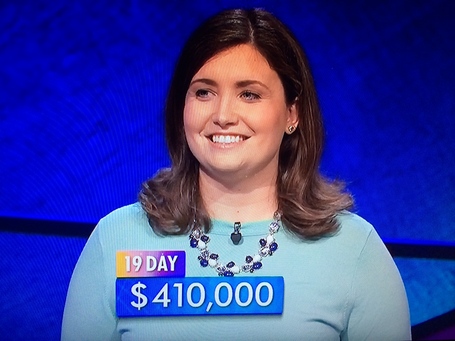 Friday night's game was a tight one, and it came down to Final Jeopardy-- a rare occurrence during Julia's dominant streak. 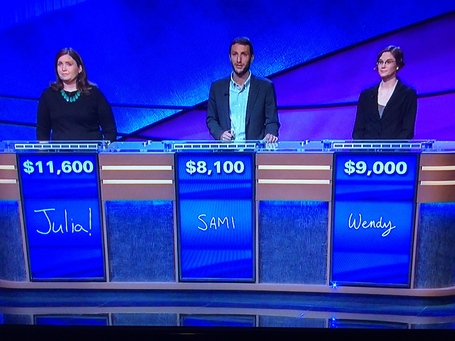 Wendy was just a couple thousand dollars behind Julia entering Final Jeop, and she got the correct answer to the 19th Century History clue: "A senate seat from this southern state sat vacant for 4 years; when it was filled, its ex-occupant had become U.S. President," putting her in first: 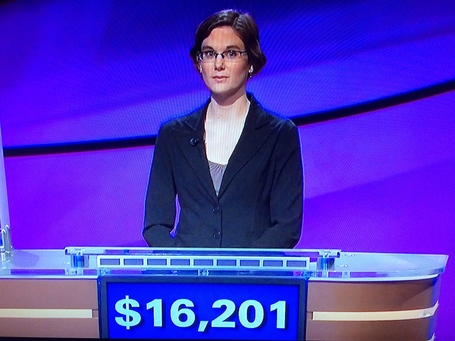 You could tell by the smile that Julia had it right as well, but did she wager enough to jump Wendy? 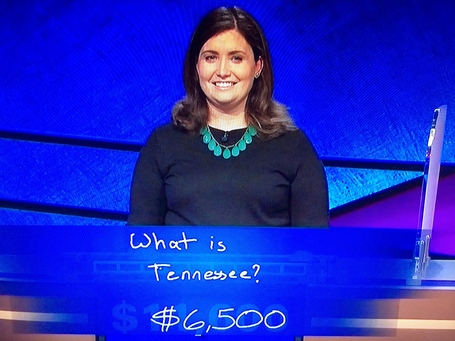 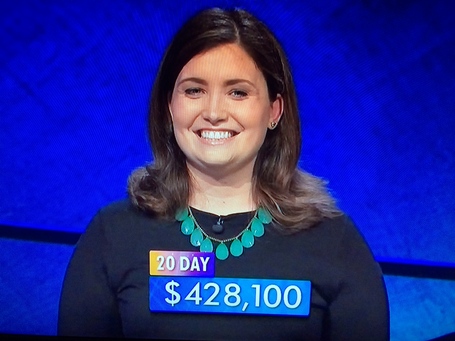 (And she's less than $2,000 away from earning the second-most non-tournament Jeopardy money EVER behind only Ken Jennings.)

Update (6/3): DOWN GOES JULIA! Collins crushed the Jeopardy round on Monday June 2: 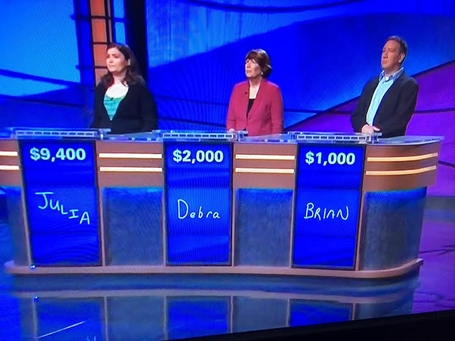 But a couple blunders in the Double Jeopardy round (including blowing a Daily Double by naming "calculator" instead of "abacus" as the counting device with a name of Greek origin) put her behind Brian entering Final Jeopardy, and when she bet it all on an incorrect guess of Michael Chabon as the last writer to win an Oscar for an adaptation of his own book, she knew she was toast (but stayed smiling, because she's Julia): 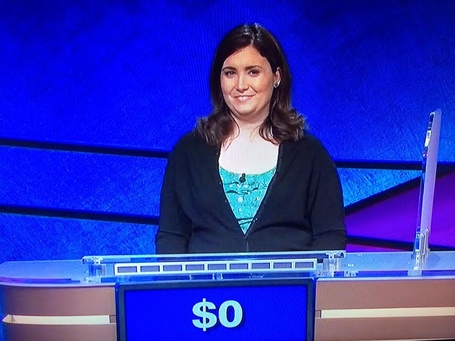 And here's your new champ, Brian: 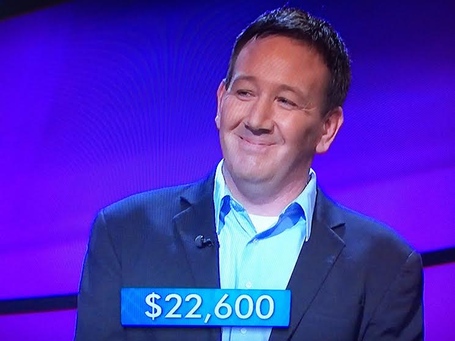 He's Irish. He's smart. He's quiet. We'll like him. But we'll miss Julia Collins so much. To recap: Julia finished with a 20-day win streak and, including her third-place prize from Monday, $429,100. That's the second-longest win streak in Jeopardy history and JUST short of the second most non-tournament money in Jeopardy history. Julia's a legend, and we'll see her in the Tournament of Champions someday soon.