Every top NBA Draft prospect in one Venn diagram

Enjoy a semi-comprehensible chart depicting the skills of the best 2014 prospects.

Share All sharing options for: Every top NBA Draft prospect in one Venn diagram 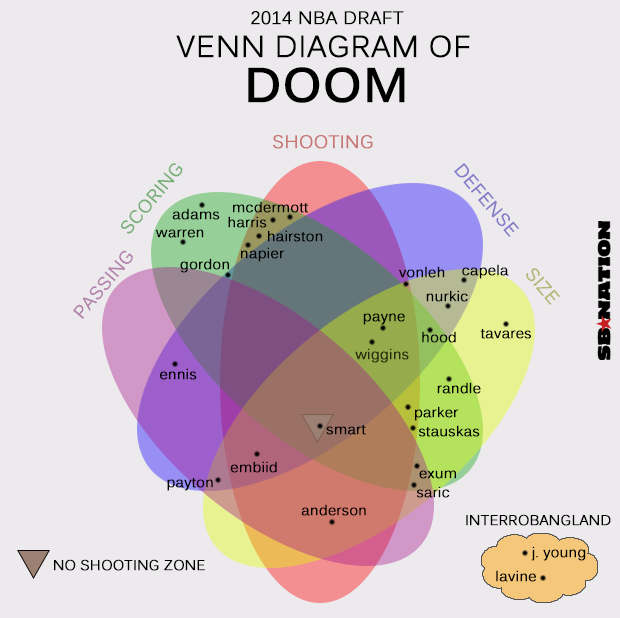 Meet your 2014 NBA Draft prospects, conveniently presented in one big chart. I took five major skill categories -- well, one isn't so much a skill as a birthright -- and plotted the top 25ish prospects where I think they belong. A few notes:

* No one is in all five zones. Andrew Wiggins and Marcus Smart came closest. I honestly wouldn't be surprised to see Jabari Parker, Adreian Payne, Dante Exum or Joel Embiid there soon enough.

* The design of the Venn forced creation of a special "no shooting zone" in the middle, which is where Smart resides. Alas.

* Interrobangland is for prospects I have absolutely no clue what to do with other than yell at their highlights. James Young could have snuck into a few zones on the main chart, but not confidentially. Zach LaVine probably deserves his own Venn diagram mathematics.

* There are a good number of scorers at the top of this draft! That, or my threshold for being considered a good scorer is too low.

Reminder: the draft is Thursday at 7 p.m. ET. Check out all of our coverage at our NBA Draft hub.