The ESPYs are on, so welcome to our award show, the SBs!

We have our own awards to give! They are different from ESPN's awards.

Share All sharing options for: The ESPYs are on, so welcome to our award show, the SBs!

Today is the slowest day on the sports calendar -- no MLB, no NBA, no NFL, no NHL, no World Cup, etc. -- so ESPN holds the ESPYs!

However, we, the people of the Internet, like sports for so many reasons that are not captured in the awards they give out, like Play of the Year, Best Male Athlete of the Year, and so on and so forth. And plus, we really hate it when people think that SB Nation is "ESPY Nation," which happens once in every 20 times we say what site we work for.

So, we present to you THE FIRST ANNUAL SBs, with an internetty touch. Check back here as the night goes on to find out the nominees and winners.

Butt of the Year

Jake Butt tweeting about his name being butt

In the mixed zone, Javier Mascherano spared no words to describe the move: "I do not want to be rude ... I tore the anus that play. So the pain ..."

And the winner is...

Sports Animal of the Year

And the nominees, after a BRUTAL elimination process:

The Ginuwine Living Memorial Pony Of The Year

An tribute to SB Nation's favorite song. Your nominees:

And the winner is...

And now, the nominees for...

@__Kingsleyy5 I didn't ask for your glazed donut face ass to root for me anyway!!!!

Kevin Pritchard mixes up the Brooklyn Nets and Brooklyn Decker

Big game today. In NY to take on the @BrooklynDecker Basketball never sleeps! 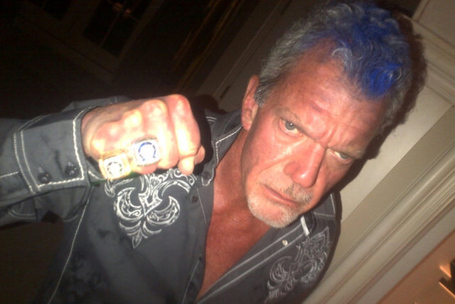 I looked angry during the game its cause I used flexall/Bengay on my knees under my black tights. Somehow it got on my balls. Burned so bad

Now this takes strength and focus 2 be the horse pic.twitter.com/3MS7yZJ6fL

Joel Embiid aspiring to slide up in Kim Kardashian's DMs

Hey I want you to come slide in my DMs @KimKardashian

Oh I didn't know you were married sorry @KimKardashian just saw it from the fan's tweet... have a nice day

@__Kingsleyy5 I didn't ask for your glazed donut face ass to root for me anyway!!!!