John Daly is at the British Open, wearing pants with busty women and SpongeBob

Even at golf's most prestigious events, John Daly wears the most preposterous pants.

Share All sharing options for: John Daly is at the British Open, wearing pants with busty women and SpongeBob

Today, he wore these pants with pictures of busty women on them:

Does John Daly have strippers on his golf pants??? pic.twitter.com/AKzHbLOaLw

Zoom. Enhance. We weren't sure what was going on with @PGA_JohnDaly's trousers today but now we've figured it out. pic.twitter.com/uNShedC7T9

During his practice round, he wore SpongeBob SquarePants pants. (Sponge Bob Square Pants-Squared?) 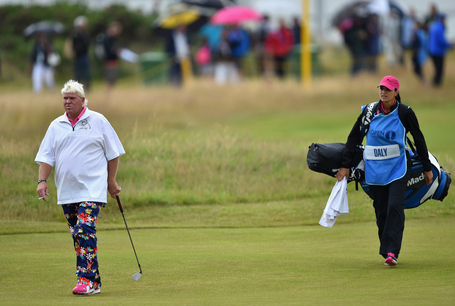 Also of note: the cigarette. 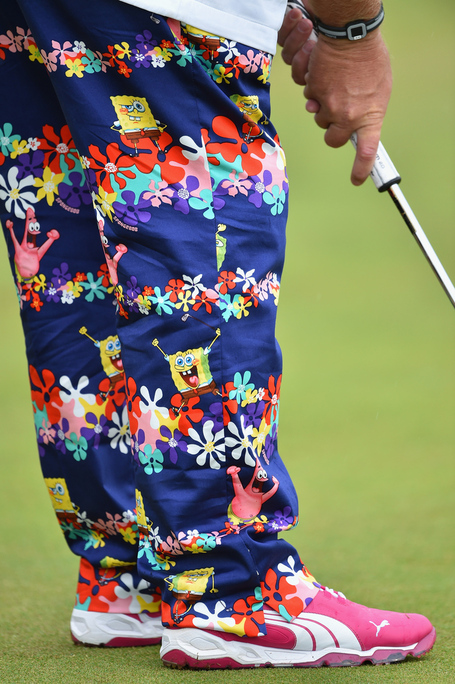 Which raises the question: what's the Venn diagram for people who like SpongeBob and are old enough to be attracted to women and therefore want to put caricature cartoon babes on their pants? It's just John Daly in the middle, right?

We salute you, Mr. Daly, and hope you continue rocking the wildest pants in Royal Liverpool Golf Club history. Although we suspect you'll only have one more day, considering you're 5-over after the first round, but may you continue coming back year after year after year until they finally just say "WE'RE SICK OF JOHN DALY HAVING A LIFETIME EXEMPTION WHY DID WE EVER ALLOW THAT TO BE A THING."

- America, for the Fourth of July

-American flag because he was playing with Kid Rock

-Hooters pants, in which Daly finished dead last by 11 shots