Some guys at EA Sports made a real life version of FIFA, it is awesome

This is the most realistic FIFA could possibly look.

Share All sharing options for: Some guys at EA Sports made a real life version of FIFA, it is awesome

FIFA is an incredible game. So easy to pick up, so addictive, so close to realism with just a twinge of Things Actual Soccer Players Rarely Do. It's no wonder it's one of the world's most possible games.

But how realistic could it get? That's what EA Sports employee Marius Hjerpseth wondered. He made a video of himself and other employees playing real life soccer on a field at EA Sports headquarters in Vancouver, and edited it like it was a part of the FIFA franchise -- Martin Tyler commentary, player indicators, shot power meters, goal celebrations and all.

It's incredibly well put together. Our personal favorite part is the IRL Dead Fish, our celebration of choice. 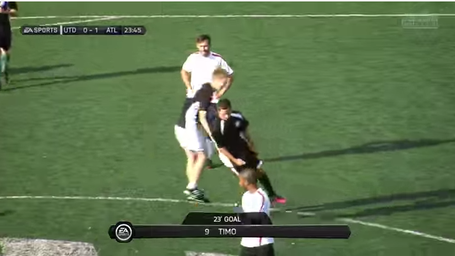 Hjerpseth talked to a Norwegian website about how he made the video, translated here:

I sent an internal e-mail and asked if anyone was interested in lining up to participate in the recording.Around 70 people signed up, and we chose a group that included only the top players...

Most of what goes on in the video, apart from the obvious, was from a real fight (we let the cameras roll and played a real battle that lasted approx. An hour), so I had 1 + hours of footage from six cameras to reviewing and so edit together in a way that told a little story.