People trampled all over LeBron's neighborhood as he thought about his free agency destination, but he made up for it with cupcakes!

Things got hectic on the days surrounding LeBron's announcement around LeBron's house in Bath, Ohio. Random fans, cops, journalists -- hundreds of people went to LeBron's place of residence, even though he wasn't even in Ohio.

So to make up for the commotion, LeBron gave a little something to those in his community: (Via Reddit) 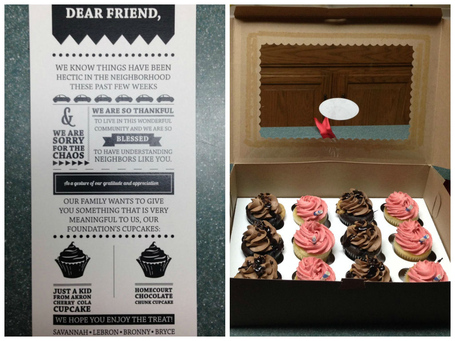 A) "Just A Kid From Akron Cherry Cola Cupcake" has a ridiculous name and sounds like the best and/or worst cupcake imaginable.

B) You might remember that before LeBron made his announcement, one of the conspiracy theorists convinced LeBron was headed back to Cleveland was... wait for it... A CUPCAKE STORE OWNER. Move over, Adrian Wojnarowski -- the cupcake people are the real movers, shakers and newsbreakers in the NBA. They are the NBA Illuminati.

(It should be noted that these cupcakes are actually a thing that raises money for LeBron's charities, so, that's a thing.)