They couldn't unroll it, and then it almost ate a person.

The first five innings of Yankees-Rangers were pretty uneventful. Then the skies opened up:

Heavy rain, lightning and wind to the point that the groundskeepers couldn't really unroll the tarp because it was so waterlogged:

They eventually covered the field -- but only after it had been soaked, and not without moments of peril:

One of the grounds crew got caught inside the tarp & others had to go in to rescue him. I am not making this up. pic.twitter.com/HCH5qmOTRD

The final unrolling required the added help of people not even in the crew:

And at last, tarp: 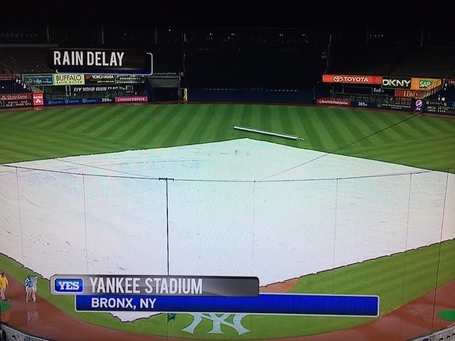