ESPN's Jim Bowden is having a weird trade deadline

Share All sharing options for: ESPN's Jim Bowden is having a weird trade deadline

Jim Bowden is the former GM of the Reds and Nationals, and currently an analyst for ESPN. He's also having a very weird trade deadline. A fake Joel Sherman account tweeted that Marlon Byrd was going to the Yankees, and it was retweeted because people are fools. A minute later, Bowden tweeted this:

Confirming the scoop? A scoop of his own? Or reading Twitter with the rest of us and passing the scoop off as his own? It sure looks like the latter. A half-hour later, Bowden's Twitter handle changed to @JimBowdiv, and he has an newbie's egg for a profile picture. There's no mention of ESPN or XM anywhere. 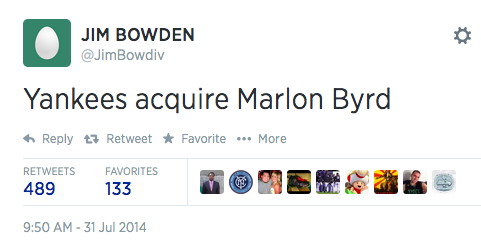 There are people having a stressful deadline right now, but it seems like Bowden might be atop the power rankings.

And now it's time for Jim Bowden GIFs.

Update: First, once Bowden changed his handle to @JimBowdiv, that left the old account wiiiiide open. Someone swooped, so get ready for some fake rumors!

I messed up. #confirmed

That's not Jim Bowden. This new one has 300+ followers. Be warned.