Share All sharing options for: Cavs explain why they took down Dan Gilbert's letter to LeBron James

By now, you've probably noticed that Dan Gilbert's famous Comic Sans letter to LeBron James, an active link on the team's website even four years later, was taken down for good Sunday night at the same time rumors circulated about a meeting between the Cavaliers and James' agent to discuss a potential reunion. This is the page that now exists in its place. 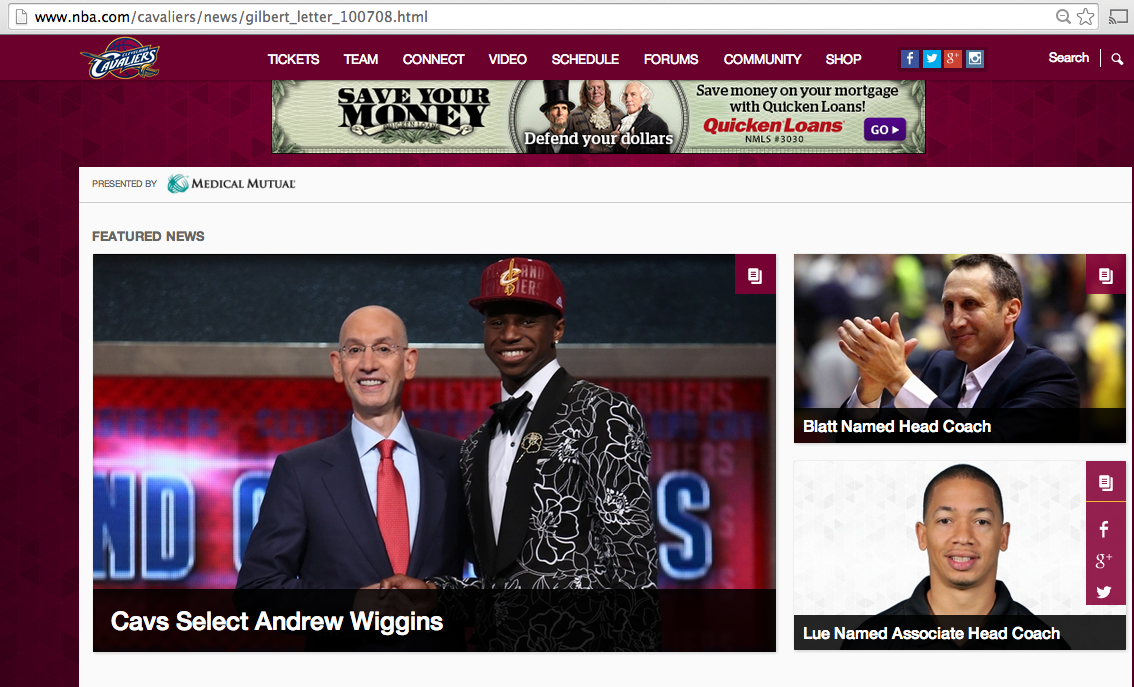 That's a simple redirect to the Cavaliers' news and features page.

The timing of the decision, given Cleveland's recruitment of James for a possible reunion in Cleveland, is impossible to ignore. But according to the Cavaliers, the decision to remove the letter was actually about closing a loophole they already believed had been shut.

"The letter was removed years ago from the Cavs.com website, but over the last week, it was discovered that it still existed from this external link to a stagnant archived page," Cavaliers director of communications Tad Carper told SB Nation. "It was on the content management system platform that was used back in 2010."

Even if it doesn't mean the easiest path to a championship, the return of the King means a young roster has the best leader it could ever hope for.

Gilbert apologized to James for 2010 letter

The Cavaliers owner apparently did fly to Miami to meet with LeBron James on Sunday. During that meeting, he apologized for an infamous letter criticizing James for leaving Cleveland in 2010.

The right decision Gilbert apologized to James for 2010 letter

Thus, everyone within the organization proceeded as if nothing strange was going on. But when James' free agency started to kick into gear, one employee noticed a spike in traffic to a page that was believed to be purged from the Internet. A decision was made to delete the letter again, but the process was more complex because the team did not have direct access to the site's old CMS. Thus, the team had to ask the league to do it for them.

James' rumored meeting with the Cavaliers Sunday is of course why the letter's deletion is significant in the first place, but Carper downplayed the timing of the move beyond noting the spike in traffic to that page.

"Quite frankly, we weren't looking for [the letter] because we knew we deleted it," he said. "If [it still being an active url] would have become apparent a year ago, we would have deleted it too."

Because this is hilarious, though, we're going to ensure the letter is still preserved in some form, which Carper said he understands will happen and has happened elsewhere. This way, though, at least it won't be associated with the team's official website.

Dear Cleveland, All Of Northeast Ohio and Cleveland Cavaliers Supporters Wherever You May Be Tonight;

As you now know, our former hero, who grew up in the very region that he deserted this evening, is no longer a Cleveland Cavalier.

This was announced with a several day, narcissistic, self-promotional build-up culminating with a national TV special of his "decision" unlike anything ever "witnessed" in the history of sports and probably the history of entertainment.

Clearly, this is bitterly disappointing to all of us.

The good news is that the ownership team and the rest of the hard-working, loyal, and driven staff over here at your hometown Cavaliers have not betrayed you nor NEVER will betray you.

There is so much more to tell you about the events of the recent past and our more than exciting future. Over the next several days and weeks, we will be communicating much of that to you.

You simply don't deserve this kind of cowardly betrayal.

You have given so much and deserve so much more.

In the meantime, I want to make one statement to you tonight:

You can take it to the bank.

If you thought we were motivated before tonight to bring the hardware to Cleveland, I can tell you that this shameful display of selfishness and betrayal by one of our very own has shifted our "motivation" to previously unknown and previously never experienced levels.

Some people think they should go to heaven but NOT have to die to get there.

Sorry, but that's simply not how it works.

This shocking act of disloyalty from our home grown "chosen one" sends the exact opposite lesson of what we would want our children to learn. And "who" we would want them to grow-up to become.

But the good news is that this heartless and callous action can only serve as the antidote to the so-called "curse" on Cleveland, Ohio.

The self-declared former "King" will be taking the "curse" with him down south. And until he does "right" by Cleveland and Ohio, James (and the town where he plays) will unfortunately own this dreaded spell and bad karma.

Tomorrow is a new and much brighter day....

I PROMISE you that our energy, focus, capital, knowledge and experience will be directed at one thing and one thing only:

DELIVERING YOU the championship you have long deserved and is long overdue....