After the Yankees took the lead back in the bottom of the fourth, it was important that A.J. Burnett come out and keep the Rangers quiet in the fifth. He did. He very nearly didn't.

With two outs and nobody on, Elvis Andrus slapped a single into left field and stole second base, and Michael Young walked, to bring Josh Hamilton to the plate. Hamilton tried to help Burnett by giving him a foul pop-up, but as Brett Gardner attempted to make a catch behind third base, a fan leaned out and prevented him from doing so. 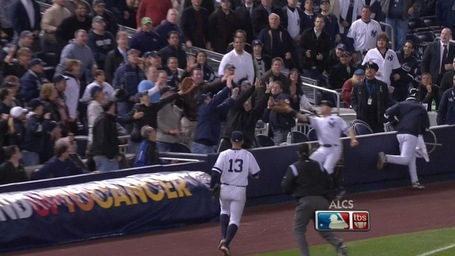 That gave Hamilton and the Rangers new life - a dangerous situation for the Yankees. But Hamilton would end up flying out to center on a 2-2 pitch to end the inning.