2010 has just about come to a close, giving us an opportunity to reflect on all the big stories we've seen in Major League Baseball over the past calendar year. Let's see how many you remember.

Share All sharing options for: Baseball Stories Of The Year: Giants, Cliff Lee, And Jim Joyce Make Headlines In 2010

A common beginning in reflection pieces like this is that "it was a year unlike any other." It's hackneyed and trite and a whole host of other synonyms too, but it's also true every single time. No two years are ever created alike. Every year brings with it its own unique storylines, and while some years may have more than others, each and every one is dependably compelling. There's no such thing as a boring year. One just can't ever happen.

Thus, as is the case for every year, 2010 was something of a wild ride not fit for the faint of heart. From Aroldis Chapman signing with the Reds in January to Zack Greinke getting dealt to the Brewers in December, we've had another 12 months of expected but unpredictable ups and downs, with each one feeling fresh out of the box.

With so many twists and turns, it's easy to recall just a few and forget a lot of what we've seen take place. And so, for your convenience, it's my intent here to rank the top five MLB stories of the calendar year as part of SB Nation's Best Stories of 2010 series. The rankings, naturally, are completely subjective and based on a complicated and indecipherable formula trapped deep within my brain, but more important than the numerical rankings are the actual stories themselves. Let's take this opportunity to look back on the big things we've witnessed since the last New Year's Day.

Before advancing to the top five, I do want to quickly acknowledge some of the big stories that just narrowly missed the cut. Any such list of honorable mentions will be incomplete, but that's just how it goes, and it's important to remember that 2010 was more than just five big headlines. Alex Rodriguez became one of just seven players with 600 career home runs. Aroldis Chapman arrived and threw the fastest fastball ever recorded. Bobby Cox, Joe Torre, and Lou Piniella retired as legendary managers. Ken Griffey Jr. retired as a legendary player. George Steinbrenner passed away. Jose Bautista slugged 54 home runs. Roy Halladay threw a perfect game and then added a no-hitter in his playoff debut. Jason Heyward arrived and homered in his first big league game. And teams like the Cincinnati Reds and San Diego Padres rose up as highly competitive underdogs. 2010 has been an incredible year, and the fact that none of those stories made the final five list says an awful lot about how much fun it's been to follow along.

So with all that out of the way, let's get to the list. 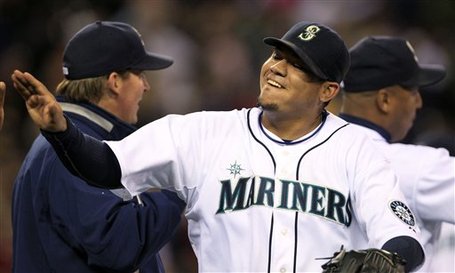 In the interest of full disclosure, I am a Mariners fan, and am in no way free of my biases. So it's possible that I've ranked this a bit too high. But anyhoo, all season long, it was apparent that King Felix was very very good, and not winning many games. That's what happens when you pitch for a 61-101 ball club.

Down the stretch, Felix was the only relevant player on the team, and he was relevant because of his pursuit of the Cy Young. However, Felix finished with a sparkling ERA but a 13-12 record, his win total tying him for 18th in the league. The story that dominated headlines over the final few weeks of the regular season was whether or not Felix deserved the award despite his low win total. There was a very convincing case to be made that he was the American League's best pitcher. At the same time, though, his would be the worst record for a starting pitcher in Cy Young history, and the lowest number of wins.

But he won. More than that, he won in something of a landslide, pulling home 21 of 28 first-place votes. The Baseball Writers Association of America saw past a mediocre record for pretty much the first time ever, and while ultimately individual player awards don't really mean very much, this was nevertheless a landmark moment from a storied and stubborn organization. After all the talk and all the uncertainty, the most deserving candidate won, and won big. There was much celebration. 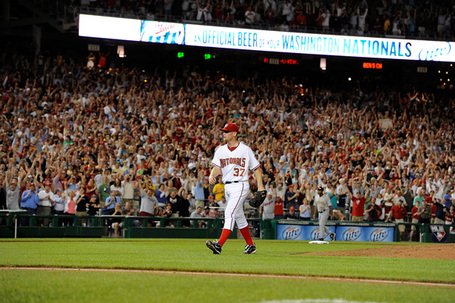 Hype is nothing new. Hype is the inevitable consequence of so many different sources trying to make themselves stand out, and young players and exciting events get hyped all the time. Top prospects in particular tend to draw a lot of hype as people go in search of the next big thing.

What's rare is for the subject of the hype to live up to all the attention. Talk of Stephen Strasburg being a Hall of Fame talent dates back to 2008, when he was a junior for SDSU, and by the time he finally ("finally") arrived in the Majors in June 2010, the hype had turned into expectation. People didn't tune into his big league debut hoping to see a flame-throwing young ace. They tuned into his big league debut expecting to see a flame-throwing young ace.

And under the spotlight, Strasburg delivered. He struck out 14 batters over seven innings in his first-ever start. He whiffed eight in his next, and ten in the start after that, looking every bit the un-hittable dynamo as which he was billed. Strasburg started 12 games in all, and his final strikeout rate ranks behind these names: Kerry Wood, Pedro Martinez, and Randy Johnson. That's it. In the history of Major League Baseball, only those three starters have ever posted a strikeout rate higher than Strasburg's 12.2 per nine innings.

And then he got hurt. Badly hurt, such that he required ligament replacement surgery in his elbow. Strasburg was carefully monitored and protected, but in the end, it didn't matter, as he went under the knife anyway. He arrived on the scene flashing arguably the best repertoire in the world, and left as just another piece of evidence that parents shouldn't teach their kids to be pitchers. His year wasn't boring. 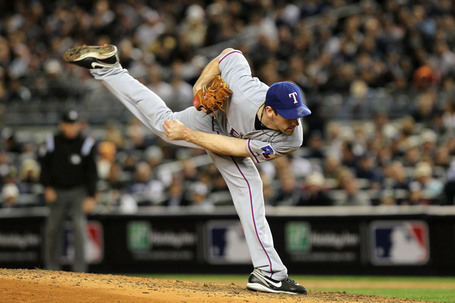 If the Yankees always got their way, baseball would hardly be worth watching. But they don't, and I don't know that there's any better example than Cliff Lee. Lee entered the year as a veteran ace with World Series experience, and he was available at the deadline as a piece to put the Yankees over the top. The Mariners backed out of negotiations at the last second, though, and sent him to Texas, with whom Lee would go on to beat the Yankees in the playoffs.

Then came the off-season, when Lee was the top free agent available. It was widely assumed by fans, teammates, and executives that Lee would end up in New York, but he spurned them again at the last moment and surprised everybody by signing with Philadelphia.

Cliff Lee would've been a story on his own in 2010 on account of his 11.6 strikeout-to-walk ratio, which is the best of all-time. But it was all of the non-performance elements that really vaulted him into the top three. He rattled the entire baseball world on more than one occasion.

2. The Giants win the Series 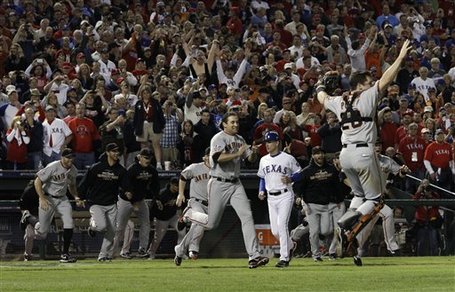 It would've been enough for them to rally from a six-game division deficit at the end of August. That was already sufficiently improbable. But to then do away with the Braves, the consensus favorite in the Phillies, and the team with Cliff Lee in the Rangers - the Giants were never supposed to be a bad team, but by winning it all, they proved that all you need are a couple great players and some phenomenal timing.

Cody Ross. Edgar Renteria. Juan Uribe. Aubrey Huff. And so on. We don't need to tell the whole story over again, but the Giants wound up winning in large part because of a whole bunch of castoffs that no one else wanted. In that way they were refreshing, and also a shining source of hope for every team in the league. If the Giants can do it, why not the A's? Why not the Marlins? Why not the Blue Jays? The 2010 Giants are a weapon in the war against pessimism.

The way it ended - with Tim Lincecum pitching brilliantly, and Renteria supplying the runs against Lee - was perfect. The final game of the season captured what the Giants were all about. They were built around some elite-level talent, but they also got the right help at the right time from an assortment of role players from which little was expected. It may not be a roster that wins every time, but it's a roster that won once, and flags fly forever. The Giants were a blast. 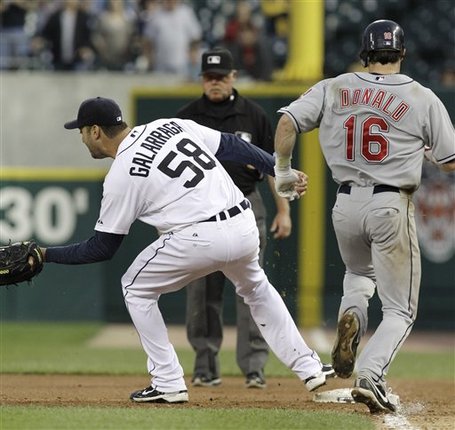 Jim Joyce's safe call was a literal jaw-dropper at the time, and it remains to this day almost impossible to believe it really happened. Generally speaking, umpires and referees are targets. The prevailing attitude, in every sport, is that they're incompetent, or biased, or otherwise prone to making mistakes. But Joyce's mistake was so enormous, so preposterous that in the end he was made out to be a sympathetic character. Tigers fans gave him a standing ovation the next day. A standing ovation, for blowing Armando Galarraga's perfect game and owning up to it later.

As has been written about in countless different places, the way Galarraga and Joyce handled the whole thing was beyond admirable and the epitome of sportsmanship. This story wasn't just about the call. It was about the call, the immediate responses to the call, and the show on the field the next afternoon. It was about an egregious error and a swift and mature resolution that no one could have predicted at the time of the play.

When asked about the 2010 season, people will remember the Giants for a while. But Jim Joyce and Armando Galarraga - them, they'll never forget. This was unquestionably the top story of the year, and one of the top stories of the decade.