Pete Rose Is All Class, Joe DiMaggio Was All Man (But Mostly Penis)

Share All sharing options for: Pete Rose Is All Class, Joe DiMaggio Was All Man (But Mostly Penis)

It's really hard to give context to one man's story about another man's penis, so let's just have Pete Rose tell his Joe DiMaggio story. From an appearance on 97.5 the Fanatic in Philly:

In 1967, I get a call from the state department and a guy identifies himself and he says, ‘Would you like to go to Vietnam?’ I said, ‘Not necessarily. In ’67?’ He said, ‘Well, Joe DiMaggio’s going.’ So five of us went over to Vietnam and we went to Saigon and met up on the Intrepid in Tonkin Bay. And we were there for 23 days. Now we’re down in the middle of the jungle, it’s hot, it’s so hot you can’t sleep, there’s a war going on, you can see the helicopter and every fourth bullet is a tracer. We’re up on a hill and there’s a valley and the other hill is where the war’s going on. And Joe says, ‘Man, I’ve gotta take a shower.’

Okay, so that's part one. Joltin Joe and Charlie Hustle in war-time Vietnam is crazy enough on its own. Can you imagine the brothels those two pillaged together? ... But, um, there's more. 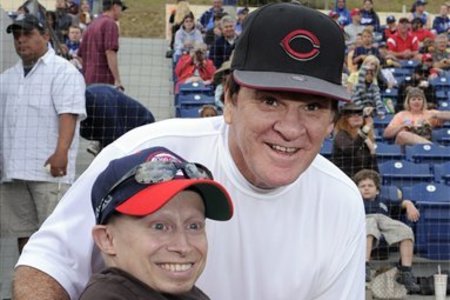 All of this comes via Sports Radio Interviews' transcript:

I said, ‘Joe, we’re out in the middle of the jungle, what do you mean you’ve got to take a shower?’ He said, ‘I don’t give a damn, I’m Joe D and I’ve gotta take a shower.’ And the only way you can take a shower, Mike, is they have these big bamboo bags, like, and somebody’s got to get on a chair and pour the water and pull a rawhide thing and the water comes through and the guy takes a shower. So I saw everything that Marilyn Monroe saw. Now, when I tell people the best way to describe Joe DiMaggio, he was a penis with a man hanging from it. … Does that give you a better perspective?"

Oh, GOD. That's not something anyone needed to think about this morning. It's one thing to inflate the myth of a man's penis size, but it's quite another to conjure the image of a man hanging from a penis. It sounds like a feminist method of torture, or conceptual art piece that's trying tell us something about man, perpetually enslaved by... Well, you know.

Pete Rose wasn't trying to tell us anything deep, though. Pretty much, he's just saying that Joltin Joe was hittin' with a much bigger bat than the rest of us. And you thought Lou Gehrig was the luckiest man in the world?!

I need to go take a shower.