2011 MLB Payrolls, By Division: NL West Projected To Be The Poorest

Share All sharing options for: 2011 MLB Payrolls, By Division: NL West Projected To Be The Poorest

As Jeff Passan has noticed, baseball's AL Central is projected to finish first in 2011 in at least one respect:

This is crazy: The only division in baseball with three $100M-plus payrolls this year is ... the American League Central? Twins, Sox, Tigers

Yes, the AL Central, the division that has won precisely one playoff game in the last three years. Passan's observation was interesting, so I decided to stack up the 2011 payroll projections of all six divisions: 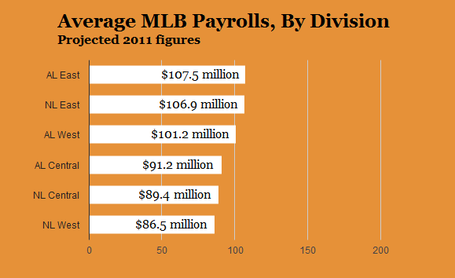 Overall, thanks to the low payrolls of the Royals and Indians, the AL Central's average payroll of $91.2 million is significantly lower than the MLB average of $97.1 million. Though there's certainly enormous payroll disparity throughout baseball on a team-by-team basis, no division is without a cellar-dweller, so the division-by-division difference isn't terribly dramatic.