Frank Thomas has a beer branded after his nickname. This isn't new, nor is it quite considered breaking news, though it is pretty awesome. Yes, if you live in Chicago or the surrounding area, you can pickup a 24-ounce can of Big Hurt Beer. It's worth it for the sentimental value alone.

Oh, and it'll get you flat hammered for a low price.

All the signs of a stinker are there: a 24-ounce can, seven percent alcohol, a whopping $1.99 price tag and a celebrity endorsement, all of which usually amounts to little more than quick sales and even quicker drunkenness.

But having a branded Big Hurt Beer is only part of the equation. It's interesting, yes, but the promotional aspect of Frank Thomas' newest venture is the fun story. Throughout December, Thomas will be appearing at various Binny's -- I'm not from Chicago and have no idea what a Binny's is, but I assume it's a beer store -- to promote the Big Hurt Beer.

And he'll even autograph your beer. But only your beer. Don't you dare bring him anything else to sign but a 24-ounce man can of Big Hurt Beer. You will be rejected. 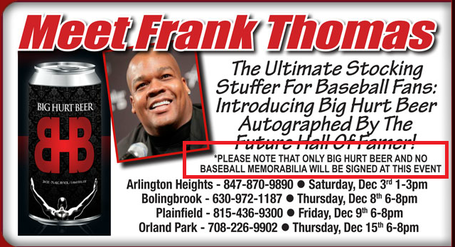