reddie Freeman and his young associate in mischief, Jason Heyward, were simply minding their own affairs. Or, at the least, the affairs that seemed worth the attention of a pair of 21-year-old rookies. It was a February day in Florida, but of course, a Florida February isn't much of a February at all, and the two gamboled in the fields, splashing drops of dew as they stomped through the grass.

It was noon when young Heyward found a cart of base-balls. Without a second thought, he jumped in and called to his friend. "Frederick! Push me, dear brother!" 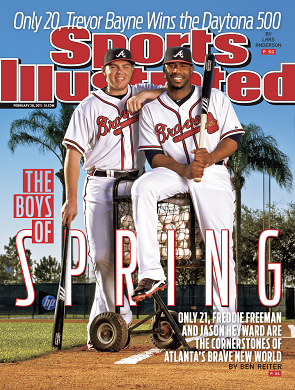 And the afternoon began to pass without notice as the Junior Freeman ferried the Junior Heyward all about the fields. It was quite a bumpy ride -- as one might expect when the careless Frederick Freeman was driving! -- but it only heightened Jason's delight. 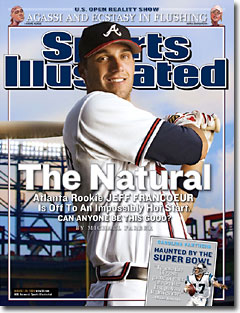 The cart ride took the pair of youngsters out of Town Proper and through Master Moriarty's vegetable fields. "You listen here!" Master Moriarty said. "You keep rolling that way, the Sports Illustrated Cover will eat you right up! You had best stay in Spring Training Proper, where young men belong!"

But the couple of fools paid no mind, even as the clouds gathered. As promised, the Sports Illustrated Cover snatched them right up, and they failed to develop plate discipline and were traded to the Mets and never heard from again. And years later, the Braves would write up a lineup with Pete Orr batting third and Scott Thorman batting cleanup, and wonder where Jason Heyward and Freddie Freeman ever went off to.