RESULTS: Who Is The Most Diamond King Baseball Player Ever?

Share All sharing options for: RESULTS: Who Is The Most Diamond King Baseball Player Ever?

Thanks to you, friends, I think we've crept a lot closer to the truth this afternoon. Here are some of your answers:

And that is a real shame, because... OK, I'm not going to post all the images here, because you really just need to go over to Dick Perez's site if you want to look through them all, but I HAVE to address this one. 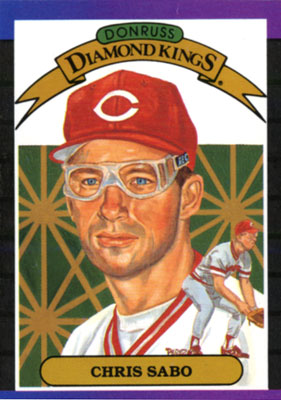 His goggles magically stick to his face like they're Geordi la Forge's visor or something. Also, the background makees him look like he's hanging out in Wes Anderson's basement, which he probably is, because "guy who wears goggles all the time for no real reason" is right out of Anderson's bag of tricks.

Mark Grace (suggested by sddbaker). Seriously, look at this dude. Mr. Perez did a great job with most of these, but he kind of whiffed here. In fairness to him, I believe the movie Coneheads was dominating the public discourse around the time he painted this.

John Smiley (suggested by Brandon Stroud of The Dugout). I like the direction taking here, but one time I opened a a pack of 1992 Pinnacle and got two John Smileys in the same pack. As such, I associate him with Pinnacle and not Donruss. This is nobody's fault but my own. I'm really sorry, everybody.

I think I got a GP Diamond King card in 95% of Donruss packs that year. He wins on volume alone.

This falls in line with my theory: packs of baseball cards are how God talks to us. If you don't collect baseball cards, he simply isn't interested in talking to you. Here, he was trying to tell you "Gerald Perry." He was always trying to tell me "Jerry Don Gleaton" when I was a kid. As it turns out, God basically just wants to shoot the s*** about jobber baseball players from the early 1990s.

Nigel Wilson (suggested by @commnman and @AaronHutch). I had NO IDEA that Nigel Wilson was a Diamond King. Upon further review, so was David Nied. For about a month, these two, who were the first members to join the Marlins and Rockies rosters, respectively, were national celebrities. They did absolutely nothing at the major league level, as it turned out, but they still got to be Diamond Kings.

This suggests to me that there was corruption in the Diamond King selection process, and that the roots of its corruption ran very deep in the selection committee, which was probably just Dick Perez, an uncut sheet of 1988 Donruss tacked to the wall, and a dart.

Danny Gladden (suggested by @davidroher). Remember that theory I mentioned earlier when I was prattling on about Chris Sabo? Throw it away. It doesn't apply to Danny Gladden, or, as my brother and I insisted on calling him when we were kids, Glanny Dadden. He was the American League's Glenn Davis minus home runs. He is multifaceted and he is a special guy. Just look at him.

We have a winner. I am certain that Gladden rules over his Diamond Kingdom with a just hand.