Albert Pujols Injury: Fractured Forearm Is Bad, But Could've Been A Lot Worse

Albert Pujols will miss 4-6 weeks with a fractured forearm, which is a big blow to his team and fans. But the injury could've been far more damaging to both Pujols' career and the Cardinals' hopes this season, writes SB Nation's medical expert Dr. Ali Mohamadi.

Share All sharing options for: Albert Pujols Injury: Fractured Forearm Is Bad, But Could've Been A Lot Worse

While Albert Pujols' injury and subsequent 4-6 week absence from the St. Louis Cardinals line-up will undoubtedly affect his team in the short term, the diagnosis -- a non-displaced fracture of the left forearm -- is far less likely to affect his career for the long term than initially feared.

Pujols, who went down in a heap clutching his left (non-throwing) wrist following a collision at first base with Kansas City's Wilson Betemit on Sunday, had both an MRI and CT of the injured arm Monday that showed a fracture near the end of the radius, one of the forearm bones near the wrist. Because the fracture is non-displaced, meaning the pieces of bone are still in alignment with one another, Pujols will not require surgery and should have no trouble returning to the field before season's end. 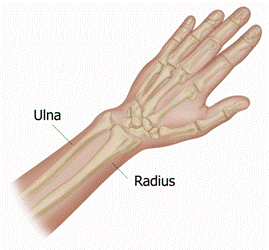 Initial reports raised concerns about possible damage to the wrist joint itself, which in a worst-case scenario could have required surgery, a prolonged rehabilitation process, and the possibility that the Pujols would never again be able to generate the same type of historic power numbers he has amassed during his 11-year MLB career. During the typical baseball swing -- and especially in one as dynamic and forceful as Pujols' -- the wrists undergo a significant amount of stress and torque as the arms and upper body powers through the strike zone. For this reason, an injury isolated to a single forearm bone is far better prognostically than one to the joint itself.

Because it is comprised of a multitude of bones, ligaments, muscles, tendons, blood vessels, and nerves, the wrist is arguably the most anatomically complicated of all the joints. It joins the forearm bones (the radius and ulna) with the bones of the hand. Fractures such as Pujols', which involve the distal (end portion) of the radius, are the most commonly occurring type in adults.

Although the Cardinals have not released full information regarding the results of Pujols' imaging studies, the relatively short timetable for recovery is consistent with what is known as an "extra-articular" distal radius fracture. In this case, the fracture involves the distal radius alone and the injury does not extend into the joint, a situation that may have resulted in damage to the blood vessels or nerves and may have ultimately caused post-traumatic arthritis.

Typically, when the fracture is undisplaced and stable as in Pujols' case, treatment is non-operative and involves immobilization. Initially the wrist is splinted to allow swelling, and once this has subsided a cast may be applied.

The amount of time required for immobilization depends on how well-aligned and well-healed the fracture appears on follow-up x-rays. Commonly, and especially in the case of more complicated fractures than it appears Pujols has sustained, it is not uncommon for orthopedic surgeons to leave the patient casted for 6 weeks or more prior to beginning rehabilitation of the wrist joint. Rehab itself, which includes range of motion and strength exercises, and a gradual return to full activity, can often take weeks or longer.

Based on the Cardinals' statement on Monday, however, Pujols seems to be on track for a best-case recovery scenario, in which as few as three weeks of immobilization may be all that is necessary prior to rehabilitation. This "fast-track" approach that is favored by some orthopedic surgeons to minimize the risk of prolonged joint stiffness associated with prolonged immobilization and is reserved for those patients with the best prognosis for a full recovery.

For these reasons, as downtrodden as Cardinals' fans are for their team's outlook over the next 4-6 weeks without their star slugger, Pujols' injury could have been far more damaging to his career as a whole. Assuming St. Louis is in the playoff hunt upon his return, Pujols should be back to contribute during this year's stretch run, and beyond.