Brian Wilson is already one of the coolest relief pitchers currently playing Major League Baseball. If he didn't have that status already locked up, however, the fact that the San Francisco Giants' closer recently picked up two pairs of Nike's Air MAG shoes would cement his status.

The Nike MAGs, an homage to the futuristic shoes that Marty McFly wears in Back to the Future 2, are being sold by Nike and the Michael J. Fox Foundation to raise money and awareness in the fight against Parkinson's disease.

The shoes are currently being auctioned off on eBay for a couple of thousand dollars per pair, but that didn't stop Wilson from deciding to wear one of the pairs in the dugout at a recent Giants' game. 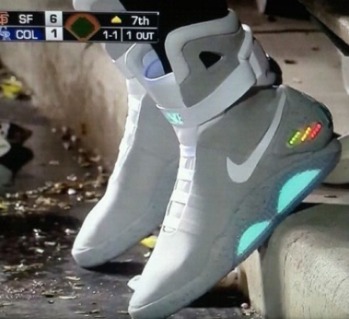 Wilson apparently "joked that he'll fit one of them with spikes," according to the Mercury News' Andrew Baggarly, which would probably be, well, amazing. He'll have to find his way off the disabled list before that can happen, however.

Either way, I just hope that as he was ordering these shoes, Wilson quoted Murphy Lee and said "Ten and a half and if you got 'em give me two of those" from the classic Nike ode from Nelly, Air Force Ones. As a sidenote, Wilson has now joined Kanye West, Kevin Durant, and Marco Belinelli in the rather exclusive Cool Shoe Owner's Club.