This is one of those movies where we start at the end. 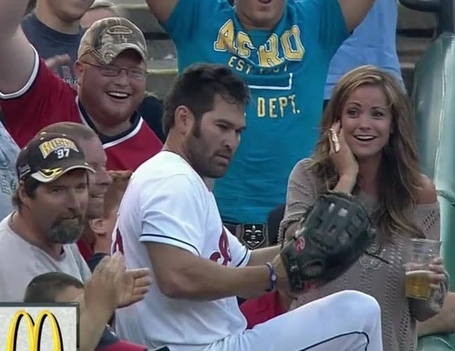 Okay, friends, let's parse this. The man in the uniform is obviously Johnny Damon looking like a caveman who just discovered fire. The ball is in his glove. He is in the seats. Something good obviously happened here.

The man in the camo hat is excited, so there's a context clue. The woman is doing "The People's Eyebrow" while holding a half-full beer. Whatever Damon just did a moment before this screenshot was taken triggered some kind of euphoric feeling for her. She's smitten.

So what happened? Magic happened.

Seriously. Magic happened (that's her bending over the rail).

It was all worth it, and she looks like Damon gave her all of that good loving.

And thus we're back to where we started. Damon went into the stands on Friday night and made a great catch. He also made a new friend in the process.