Dr. SB Nation: How to fix the Miami Marlins

Continuing a new series in which we look at where each team has been and how it might get to where it wants to go. This trip: The Marlins. Abandon hope all ye who enter here.

Share All sharing options for: Dr. SB Nation: How to fix the Miami Marlins

Diagnosis: It doesn't matter that the Astros had the worst record in baseball this season (51-111). I contend that the Marlins were the worst team in baseball this year, a directionless wasteland of replacement-level players and washed-up has-beens who lost their spots on more competitive rosters. Harsh, I realize, but it's not meant as an indictment of the players as much as the leadership, who took a roster of homegrown talent and added some huge free agents only to subtract most of what was good in one fell swoop, like a bowling ball thrown down a well-greased alley.

The Marlins increased payroll from $58 million in 2011 to $102 million in just one offseason by adding Mark Buehrle, Jose Reyes, and Heath Bell to A roster which already included Hanley Ramirez, Giancarlo Stanton, and Josh Johnson. Despite the big additions the Marlins finished 69-93 in 2012 amid disappointing attendance. Apparently owner Jeffrey Loria doesn't believe in second chances and traded the team's best players except for Stanton and fired manager Ozzie Guillen.

We'll never know if the Marlins would have kept the band together if the team had performed better in 2012 or if the free agent signings were just a smoke and mirrors attempt by Loria to silence critics of his new stadium, but whatever the case, the 44-percent roster turnover from 2012 to 2013 left the team weak and with ludicrous replacements, like 37-year-old Placido Polanco as the cleanup hitter and everyday third baseman.

Not surprisingly, the results of such a massive shedding of financial obligations and talent were devastating to the Marlins, who lost 100 games for only the second time in franchise history. Their biggest problem was offense, which was one of the worst of the modern era. There were certainly some bright spots on the roster like Stanton, rookie pitcher Jose Fernandez, and Henderson Alvarez' no-hitter on the last day of the season, but it was a season of on-field failure and contempt for the leadership who were a bigger disappointment than the 25-man roster, due to poor decision-making. 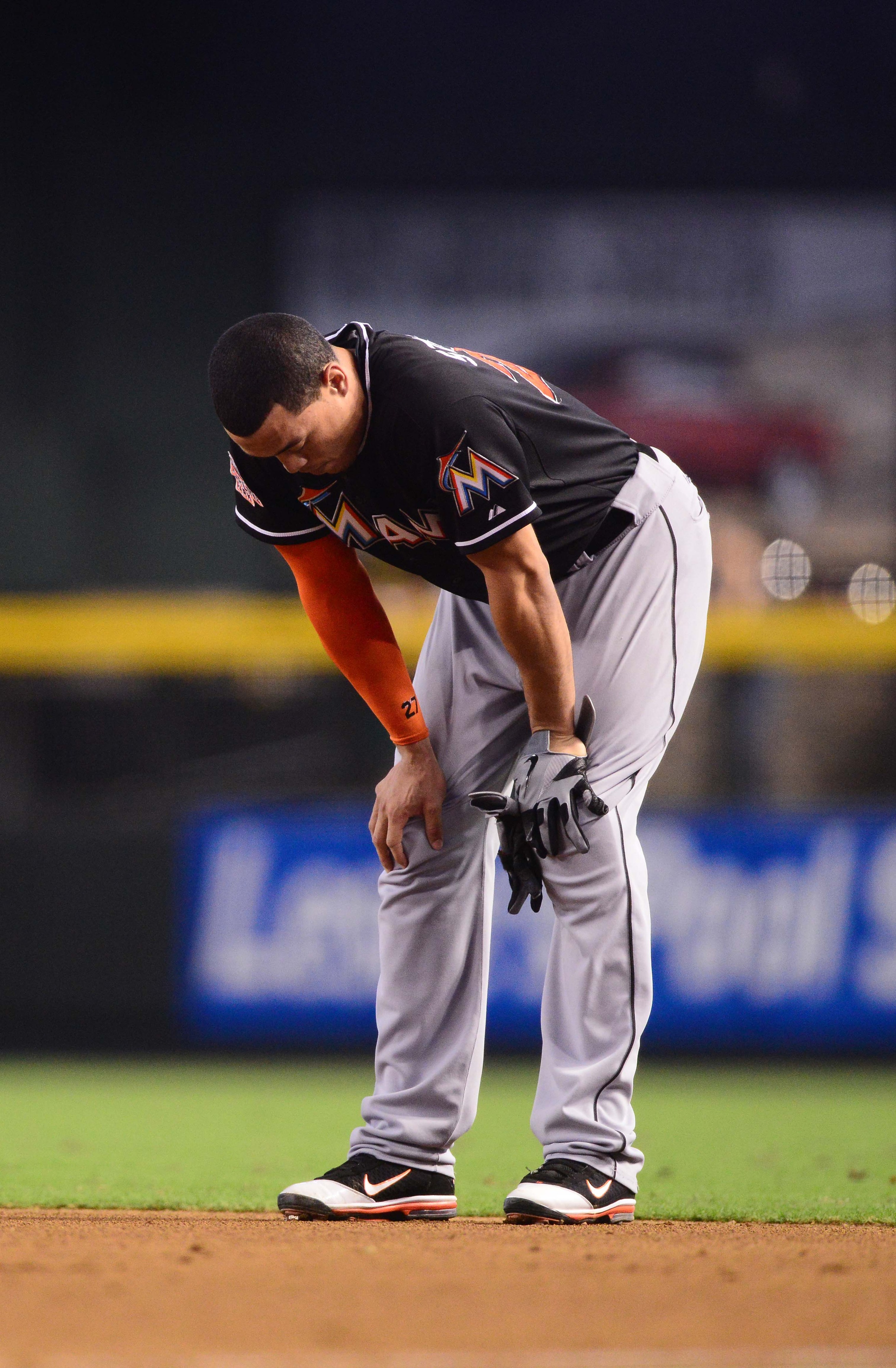 Key Stat: OPS+ (73). I could have picked virtually any offensive stat and the Marlins would have been among the worst in the league, but OPS+ is the best descriptor of the just how awful the Marlins were at the plate this year. The team's OPS+ of 73 was the worst offensive performance by a team since the 1952 Pirates, which is impressive when you consider that some of the worst offensive performances of that period came in just the last decade with teams like the 2010 Mariners and 2004 Diamondbacks putting up a team OPS+ of 79 and 77, respectively. As badly as those teams hit, the Marlins were somehow just a little worse.

Without Hanley Ramirez, Jose Reyes, and the rest, the offense turned into the "Giancarlo Stanton Show," with Logan Morrison and Justin Ruggiano as occasional supporting acts. Of Marlins hitters with 200 or more plate appearances this season, only Stanton (131) and Christian Yelich (112) posted an OPS+ greater than 100 (that is, average). The Marlins hit just 95 home runs this year, tied for the third-lowest season total since 1995; 44 percent of those belonged to two players: Stanton and Ruggiano.

Breakouts: Jose Fernandez and Christian Yelich. The brightest spot on the Marlins' roster this season was 20-year-old pitcher Jose Fernandez. In his first season in the majors, Fernandez posted a 2.19 ERA, the lowest of any rookie in history. Fernandez had the best strikeout rate in the majors among rookies this season (27.5 percent; the fourth-best overall) and while he won't win the Cy Young because of Clayton Kershaw's incredible season, Fernandez will likely win NL Rookie of the Year. Fernandez ranked third in the NL for WAR among pitchers just behind Kershaw and Cliff Lee.

Fernandez was shut down after 28 starts and 172.2 innings pitched, but there's no reason why next season he can't throw 200-plus innings next season as the team's ace.  The Marlins traded Ricky Nolasco, the only player left on the roster earning more than $2.75 million, to the Dodgers in July, and now the rotation consists of four pitchers under the age of 23, and Tom Koehler, who is 27. Surprisingly, the rotation is developing well for the Marlins, and the starters allowed just 3.99 runs per game this season, better than league average.

Christian Yelich, the team's top position-player prospect, was called up in late July along with Jake Marisnick. While Marisnick mostly proved he wasn't ready, Yelich hit .288/.370/.396 in  273 plate appearances, which made him one of the top four hitters in the lineup this year. Yelich hasn't hit for power so far (.108 ISO, though scouts predict he'll eventually be capable of around 20 home runs), but he did hit for average and showed good plate discipline with his 11.4 percent walk rate. There's some concern about his 24.2 percent strikeout rate, but in his three months in the majors, he provided some stability in a lineup where there wasn't any before. 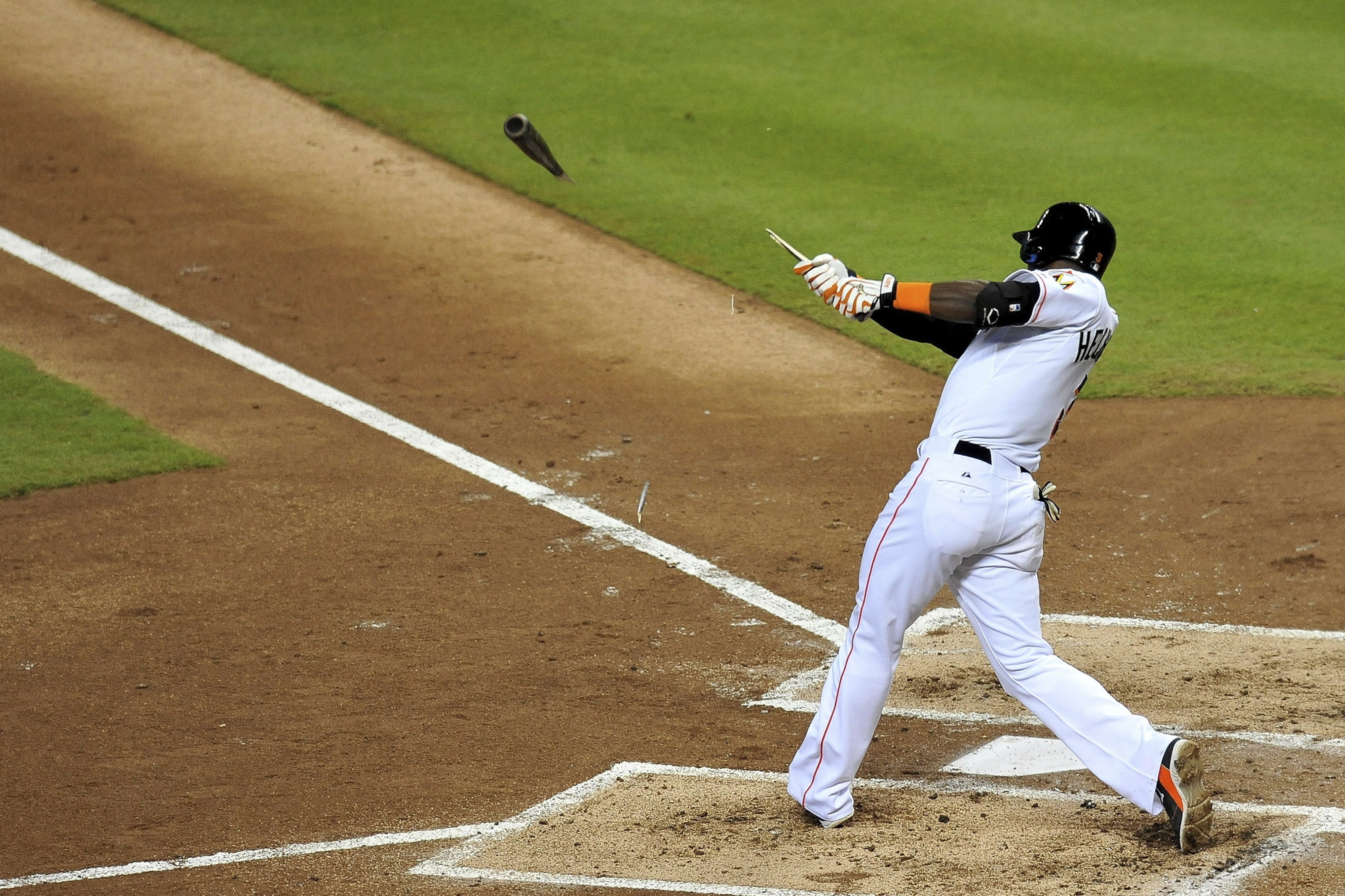 Breakdown: Adeiny Hechavarria. This Marlins' roster was made up of players who are past their prime (Juan Pierre, Placido Polanco, and Jon Rauch), players who have been replacement-level personified throughout their careers (Jeff Mathis and Miguel Olivo), and young players who are at pivotal points in their development (just about everybody else). What they all have in common is that many of them would rarely see playing time on a more competitive roster; for the developing players, many of them were rushed from the minors out of the necessity to fill roster spots, not because of their ability.

The biggest disappointment from a development standpoint this season was 24-year-old Adeiny Hechavarria, a young shortstop that the Marlins got from the Blue Jays in the salary dump of the century. The Marlins also got veteran Yunel Escobar in the trade, but they traded him to Tampa Bay before the season started, leaving Hechavarria as the starter. The decision to trade Escobar was financial as he was set to earn $5 million this season, and even though Hechavarria was not ready to play everyday, he was forced to do so, and the result was absolutely disastrous.

According to bWAR, Hechavarria was the worst player in the majors this season, costing his team -2.1 wins. He was also the third-worst hitter in the majors according to oWAR behind B.J. Upton and Luis Cruz, and there have been just two players in history (Leo Cardenas 1972 and Mario Mendoza 1979) that scored fewer runs than Hechavarria did (30) in comparable playing time.

Hechavarria is a singles hitter who doesn't single -- he doesn't hit for average, he can't hit for power, and his strikeout-to-walk ratio (3.20) was the worst on the Marlin's roster among qualified hitters. But his struggles aren't funny. They represent a kind of cruelty, a borderline negligence by the Marlins in leaving developing players in a sink or swim situation for an entire season with no reprieve. On other rosters, a struggling young player like Hechavarria might get platooned or sent back to the minors to work on skills and reinforce his confidence -- they're not allowed to sink. For the Marlins, however, there are many drownings, yet the team refuses to hire a lifeguard or two.

Worse for a team that is committed to a low budget, such sacrificial offerings consume service time to no gain. By the time Hechavarria figures out how to be a useful big leaguer (should that day ever come), the Marlins will be just about ready to get rid of him. 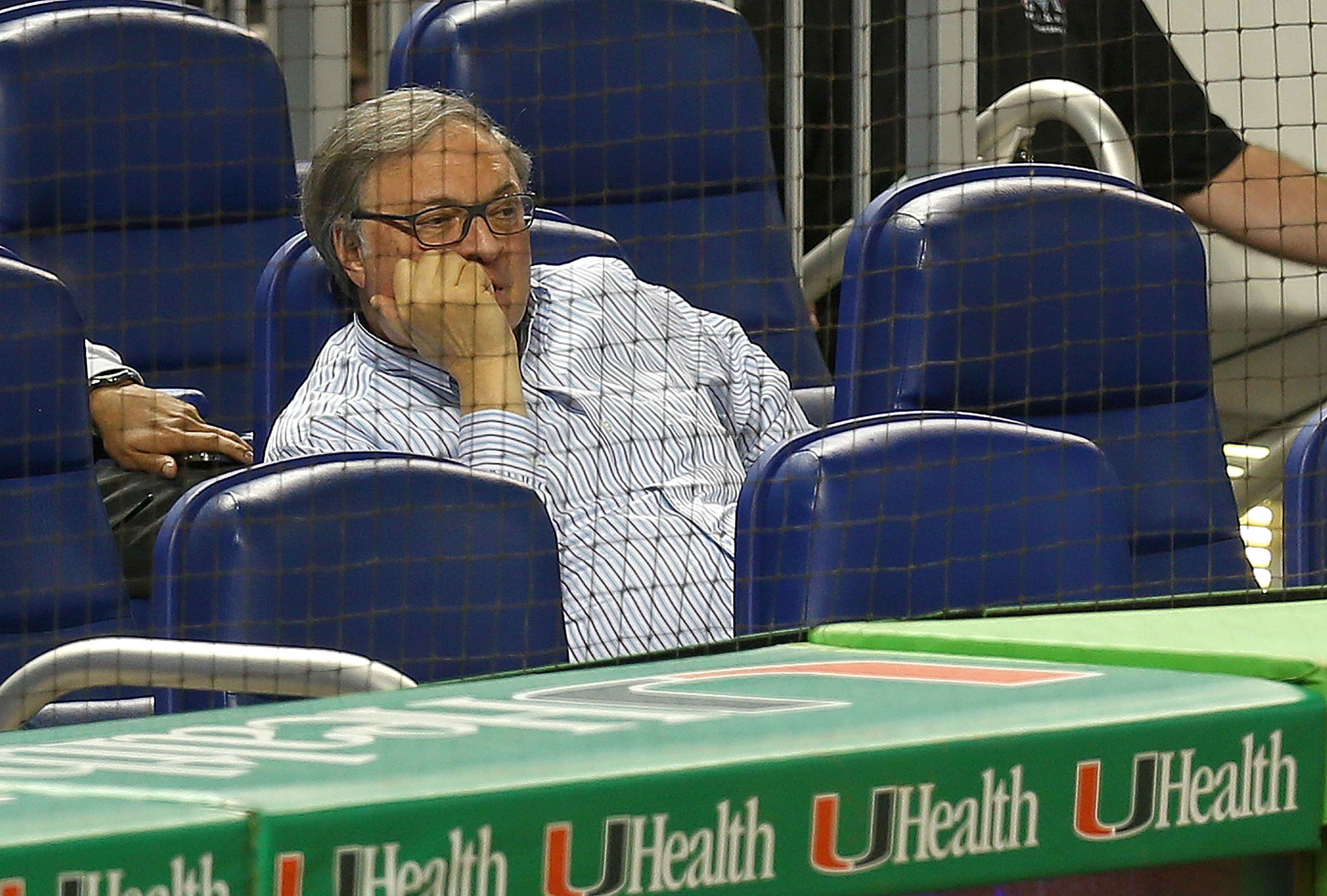 Prescription: There is a clear strategy for the Marlins to get better that involves the same approach that most teams that are rebuilding would take. Restock the farm system, focus on the draft, and spend a little bit of money on free agents. Given the intentional ineptitude of the front office (which purged longtime executive Larry Beinfest at the end of the season), it's an approach they aren't likely to employ. The team's progress is being held hostage by an owner whose desire is to line the pockets of those in charge instead of fielding a roster of major-league talent.  There's little to do but throw your arms in the air in disgust.

This will come as a shock, but aside from the money that the Marlins will have to allot to their arbitration-eligible players, they currently have just $7.2 million in payroll obligations for next season, $4 million of which goes to Heath Bell, who was traded to the Diamondbacks a year ago. The Marlins have seven arbitration-eligible players that they will need to reach contract terms with or non-tender prior to next season. If they choose to keep him, Stanton will become the highest paid player on the team, going from $500,000 to millions overnight. Ruggiano, Morrison, and relief pitcher Ryan Webb will be due for pay increases as well given their performance and could again be fixtures on next year's roster if the team tenders them.

The Marlins season in review at Fish Stripes

If the Marlins don't look into free agent upgrades, which they may not considering how far they've stripped the roster down, they could start the season with an Opening Day payroll of less than $30 million, or even lower if they were to trade Stanton.

That's the crux of the Marlins' problem: They've already promoted the bulk of their ready minor-league talent so the system is, if not bare, mostly denuded of use-now talent, particularly on the position-player side. While they have plenty of funds to spend on free agents, there's no indication that they will. What's left is an unrealistic pressure on players who were never meant to be everyday major leaguers, or aren't yet ready to be, and an organization that's indefinitely on hold, playing in a brand new, yet empty, stadium as the owners consciously choose to keep them in the throes of failure.

Even Fernandez could be gone before he reaches his mid-20s if the team won't pay him through his arbitration years.

At least the Astros have a discernible game plan and the initiative to make the team better long-term. While it makes for painful baseball in the meantime, at least their aim is true. That's not the case in Miami, where there's simply no hope unless ownership changes its ways.

• The 12 biggest names on the trading block

• Our 5 favorite memories of Jim Leyland