The Braves say they're not the "party police." But what if they were?

Bob Nightengale of USA TODAY Sports reports that the Braves don't see themselves as "the party police." But we do. Please enjoy this work of satire that imagines the Atlanta Braves as a rough-and-tumble precinct within the greater Party Police.

This article was written by Bill Hanstock and David Roth. All images by Justin Bopp.

Detective McCann sipped his coffee bitterly and stared out at the rain-slicked city streets through the driver's-side window of the black Crown Victoria. He furrowed his brow. In the passenger seat, Detective Freeman shifted uncomfortably. Cellophane wrappers and fast-food bags rustled at his feet. Three days they'd been trailing this punk. Three days just waiting for him to slip up. McCann didn't like this. He didn't like it one bit.

Beside him, Freeman cleared his throat. "What if ... " he began, then trailed off. He waited for an excruciatingly long moment, hoping that McCann would press him for the rest of his thought. What he didn't know was that McCann had zero interest in whatever was about to come out of Freeman's yap. Unfortunately, after another few moments, Freeman barreled ahead anyway. "McCann, what if this guy don't tip his hand? You know? What if he just ... " He cleared his throat again, not wanting to think the unthinkable. "What if this ain't the guy?" 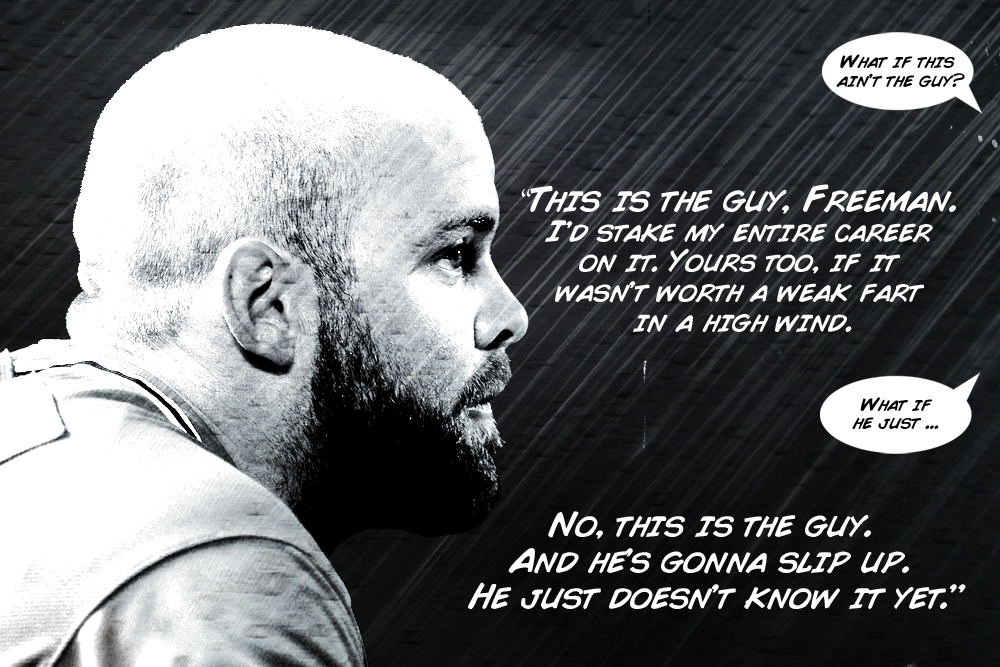 McCann fixed him with a look that made Freeman's blood run cold, then turned back to the window, his weary eyes glued on the unassuming brownstone across the street. "This is the guy, Freeman. I'd stake my entire career on it. Yours, too, if it wasn't worth a weak fart in a high wind. No, this is the guy. And he's gonna slip up. He just doesn't know it yet."

Freeman shifted again, cleared his throat again. McCann ignored him entirely. The minutes dragged on, became hours. Freeman's head bobbed from time to time as he fought back dozing off. McCann's gaze never wavered. He's like a machine, Freeman marveled, not for the first time. Someday I hope I'm half the detective he is.

Without warning, McCann sat up straight. He nudged Freeman, who was perilously close to dozing off yet again. The young detective snapped to. McCann gestured out the window toward the street. "There," he said, the word coming out closer to a grunt. The rain had never abated, but it was close to dusk. Freeman looked to where McCann was pointing.

A yellow van rolled slowly down the street toward them. It came to a stop directly in front of the brownstone.

McCann finished for him. "It is," he said, the glimmer of a grin touching the corner of his mouth. 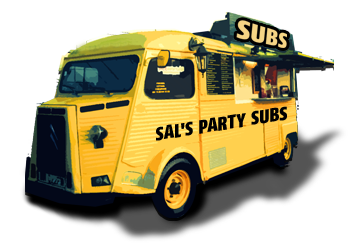 They squinted through the rain. A driver emerged from the cab of the van and walked around to the rear. The writing on the side panel of the van was plain as day: SAL'S PARTY SUBS. Freeman's breath caught in his throat. The driver opened the rear doors, then slid out a 6-foot-long pink box.

McCann's left hand went to the latch of the car door. His right hand reached into his coat and withdrew his service revolver from the shoulder-holster underneath. "Get ready, rook," McCann said as the driver made his way up to the brownstone and rang the bell. Freeman withdrew his own gun and took a deep breath. "No one orders a party sub on my watch. That creep's got some nerve."

The door to the brownstone swung open and Jose Fernandez stepped onto the stoop. "This is it," said McCann as Fernandez looked up and down the street and then reached for the driver's clipboard.

"NOW!" screamed McCann as he opened the door and rushed out into the rain. Freeman opened his door and followed, the torrent beating down steadily. 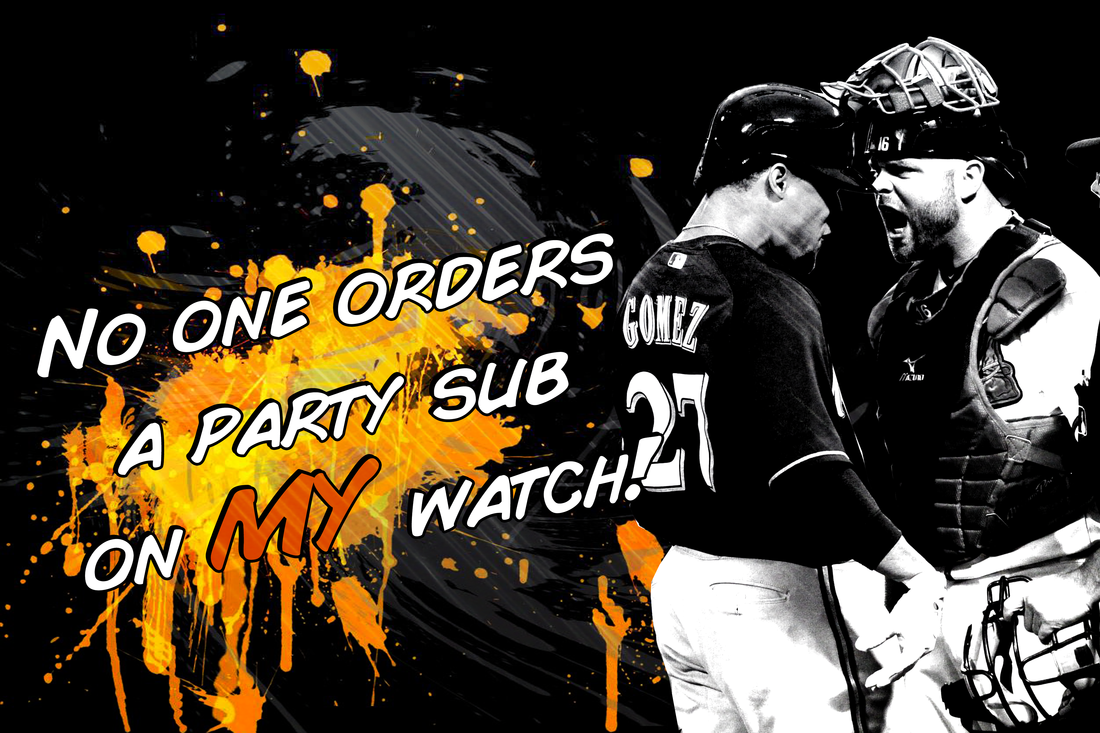 "Does this one talk?" Gomez was loose, he flailed and goofed around in the chair, which might've made him seem harmless to someone who'd spent less time on the job. McCann had seen the kid's jacket, sure, but he was also -- there in that windowless room three stories below Turner Field, there on the business side of a two-way mirror and sipping coffee that had gone cold an hour ago -- looking at, and seeing, Carlos Gomez.

And there he was, all gangly limbs and big toothy smile, a kid who played a kid's game for a living. Sure, sure. But there was something hard under all that, hard and cold but still very breakable, a thing that could crack, that would crack. That was what McCann was looking for, looking at. That's why he was staring so hard at Carlos Gomez.

"Your partner? " Gomez said. "I think he doesn't like me." And Gomez laughed, stammering and too-fast, like someone trying to start a busted moped. Little fissures in a stone.

"Sure," Freeman smiled. "Talks plenty, I promise. Believe me, I spend all day with the guy. Baseball, hunting, etiquette, the etiquette of baseball and hunting -- you name it. Won't shut up about it. But I'm going to be honest with you, Carlos." And Freeman leaned forward. He could feel McCann's eyes on him, too, a patch of heat on his back. "If you want to get out of here, you're going to want to talk to me. Right now, I'm about the only friend you've got. Because him," and Freeman tossed a thumb back over his shoulder, "that guy, he already knows what he thinks. He thinks you took a big whack at that piñata at your niece's birthday party, and stood there and watched it, and flipped the bat away, real showy. He thinks you're guilty. Personally, me, I'm not so sure."

Gomez laughed again, rocking back, then rocking forward in the chair. "How's he think that?" Freeman shrugged. "Hey, Stone Mountain Georgia, how do you think that? How am I guilty? Because you ask anybody that knows me, anyone that ever knew me, they'll tell you, 'Carlos Gomez? Never flipped a bat in his life. That's laughable.' They'll tell you that." Gomez shook his head. "Flipping a bat. Have you even been to a party before? You take the bat, you hit the piñata, then you pass the bat -- you don't flip the bat, you pass the bat -- to the next guest. That's basic. Even a kid knows that."

"Right," Freeman nodded. "Right, that is how it's supposed to be done. But that's not always how it's done, is it, Carlos?"

"What ... I don't know? What are you even asking me?" Freeman just smiled. Gomez's voice was climbing into a new register. This was where McCann wanted him to be. "And will you tell that freaking Angry Cabbage Patch Kid of a partner of yours to stop freaking staring at me like that?"

And there was the crack. McCann didn't move, but he did speak. "I talk," he said, flatly. "Hell, I like to talk. I just don't talk to liars. Think you're ready to start telling us what really happened?"

Capt. González took yet another look at the paperwork on his desk. He sighed heavily and shook his head. It broke his heart what he was about to do, but there was no other way around it. His hand had been forced. He looked up as a curt knock came from the jamb outside the open door of his office. McCann poked his head in.

"Yeah, McCann. C'mon in. Close the door behind you."

"Some great collars this week, eh Cap?" McCann asked as he closed the door and plopped down easily in the chair facing González's desk. He crossed his legs, looking supremely self-satisfied. "Really cracking down on these subhumans. Feels great. Why we do the job, you know?"

González fixed him with a look. "McCann, I've worked with you a long time. You were my star detective when I took over this precinct. That's why it's not easy to do this."

McCann leaned forward, frowning. "What are you talking about, skip?"

González leaned back. "You're a good party cop, McCann. But you think you can play by your own rules. And that just won't fly."

McCann bristled. "I don't know what you're--" 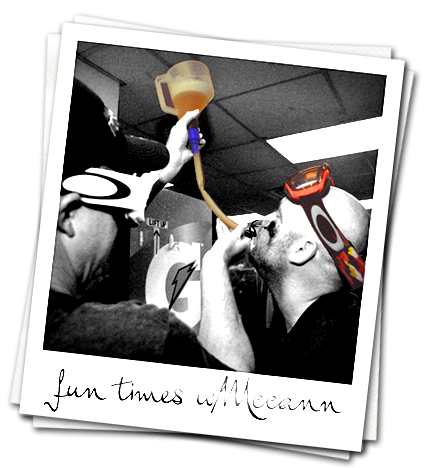 González cut him off by plopping a stack of photographs down on his desk. AP, Getty, USA TODAY ... all different syndicates, but each one capturing a half-dozen photos of McCann wearing goggles, hooting and hollering in a tarped-over locker room, spraying others with champagne, drenched with alcohol himself. One photo -- the most damning of all -- appeared to show the detective guzzling from a "beer bong."

"Dammit McCann," González said, shaking his head. "These kids look up to you. You have any idea how this looks? We're the party police, for god's sakes."

"That's your problem, McCann. That's always been your problem. You think you're above the law. But no one is. Not even the party police. Word's come down from on high. You're suspended indefinitely. Without pay."

McCann was stunned, momentarily speechless for the first time González could ever remember. Finally, he found the words.

"You gotta be kidding me," he said, his voice rising in anger. "After all I've done to clean up these streets? To keep the basepaths entirely free of celebration and glee? You've got no right!"

"No, McCann, YOU'VE got no right!" González was on his feet now, flush with anger and exasperation. "You're off the case, McCann. Freeman will take over from here. Turn in your gun and badge. Until further notice ... you're no longer a party cop."

McCann stared at González, half in anger and half in disbelief. At length, he rose. Staring bullets at the captain, he removed the badge from his hip and tossed it on the desk. His gun and holster followed.

"Here," he said. "Maybe you can find someone to be your little lap dog while I'm gone."

McCann walked to the door and opened it, then looked over his shoulder at González.

"Maybe I don't follow all your fancy written rules," he said, "But I'll be damned if I'll let anyone break the unwritten ones." He turned away, talking mostly to himself now. "Maybe I cared too much. But someone had to, dammit."

And with that, he walked away. González watched him go.