Dr. SB Nation: How to fix the Chicago Cubs

Continuing a new series in which we look at where each team has been and how it might get to where it wants to go. This week it's the Cubs' chance to turn their heads and cough.

Share All sharing options for: Dr. SB Nation: How to fix the Chicago Cubs

This was Chicago's third straight season with more than 90 losses and their fourth straight season finishing fifth in the NL Central. The only difference is that they didn't have the Astros to keep them out of the basement this year. 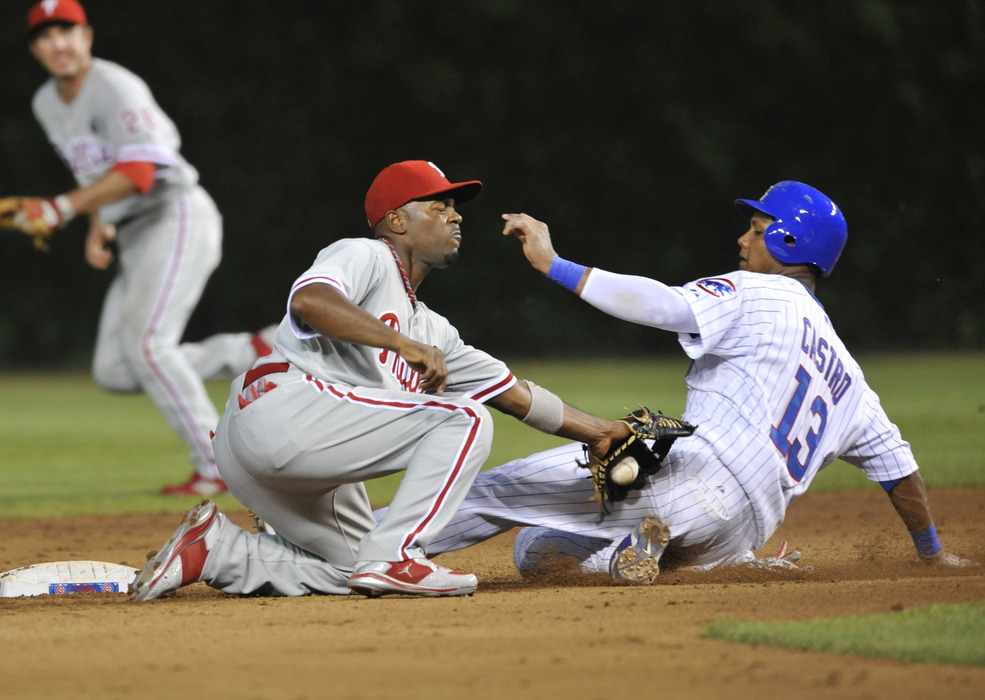 Starlin Castro doing what he does best. (David Banks)

I wrote a couple weeks back about the stalled development of Starlin Castro and Anthony Rizzo, two young players who received long, expensive extensions and were supposed to play foundational roles in the Cubs' rebuilding effort. Both fell well short in 2013. Castro, in particular, was one of the least valuable players in all of baseball, failing utterly at the plate, on the bases, and in the field. Junior Lake, a converted shortstop who wasn't on anyone's list of the Cubs' best prospects before the season, had the highest OPS (106 in 254 plate appearances) of anyone under 28 on the major league club.

They weren't the only high-profile prospects to struggle. The supposedly MLB-ready Mike Olt face-planted at Triple-A Iowa (.168/.276/.275) after he was acquired for Matt Garza, and former third-overall pick Josh Vitters was on the DL three times and has been relocated from third base to left field. The less said about Brett Jackson, who flopped at Iowa (.223/.300/.367), then got hurt, then flopped at Double-A Tennessee (.200/.309/.284) the better.

Jeff Samardzija is the only starting pitcher of note the Cubs have developed in the last decade unless you want to count Randy Wells or Rich Hill. The Cubs still have great prospects in Javier Baez, Kris Bryant, Albert Almora, and Jorge Soler, but the struggles of the most recent graduates of the Cubs' farm system leaves a lot of doubt as to whether this team can properly develop the talent it has.

It's a thin market this winter, particularly in the left-handed pitching department, so look for trades to liven things up.

The average major league club allowed 4.17 runs per game in 2013, while the Cubs allowed 4.25. That's 18th best in baseball, and not bad for a club that lost 96 games. Unfortunately, according to their fielding independent stats, that's mostly a mirage. Travis Wood may have looked like a breakout player with his sparkling 3.11 ERA in 200 innings, but his below-average strikeout rate and his ridiculously fly-ball heavy approach means he's heavily reliant on his defense and the parks he plays in. Jake Arrieta gave up just 22 runs in nine starts after being acquired for Scott Feldman, but that was entirely because of a .193 batting average on balls in play. Chris Rusin's strikeout rate was in the bottom 10 of NL pitchers with more than 50 innings.

There's good news though. Edwin Jackson's terrible 4.98 ERA hid what was actually a pretty normal year from him, as he compensated for reduced velocity by inducing more grounders than ever before. And Samardzija's 4.34 ERA similarly masked his second straight solid season at the top of the Chicago rotation. In spite of this, the bottom line is that the Cubs secretly had a terrible pitching staff last year -- their 4.13 xFIP was the third worst in baseball -- and still need to do significant work to build their rotation for 2014 and beyond. This explains why Phil Rogers has connected them to top Japanese import Masahiro Tanaka (24-0, 1.27 ERA), suggesting that the Cubs will go hard after the 24-year old righty, who they can pursue without international spending cap restrictions. 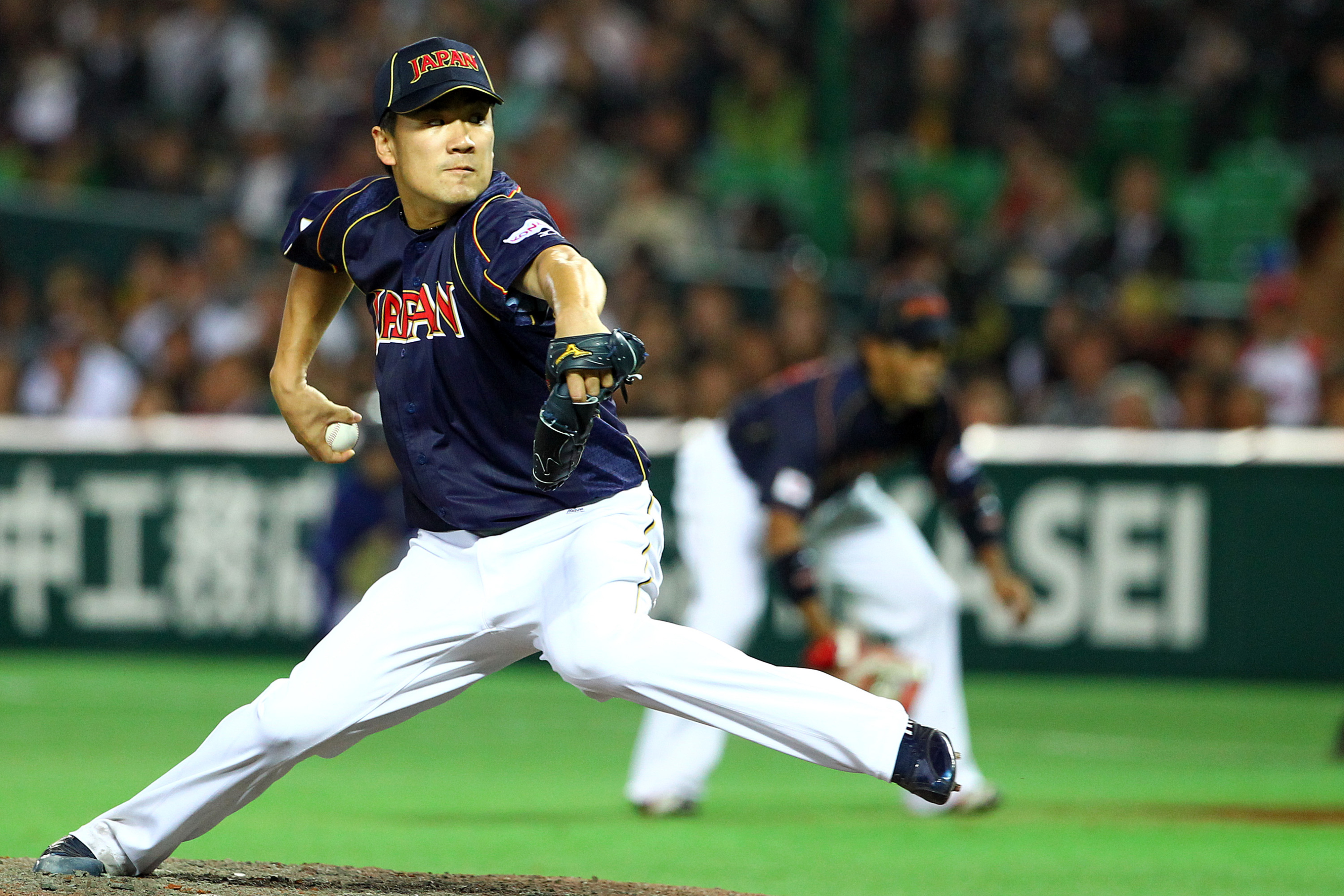 Castillo had a long apprenticeship in the minors before getting the starting job in August of last year. Signed as a 17-year-old out of the Dominican Republic, he spent ten years in the Cubs system, including parts of four seasons at Iowa, building a résumé of solid on-base skills and decent power. It took some epically bad hitting by Geovanny Soto and Steve Clevenger to get him a shot, but they obliged and here we are. Castillo combines a passable offensive approach with the best catcher defense (according to the advanced metrics) this side of Yadier Molina). In particular, Baseball Info Solutions rates Castillo as one of the best catchers in the game at blocking balls in the dirt, and he features a plus arm. Given that range isn't an issue for catchers, Castillo figures to hold onto this defensive value for years to come, and is a huge asset for the Cubs as they rebuild. 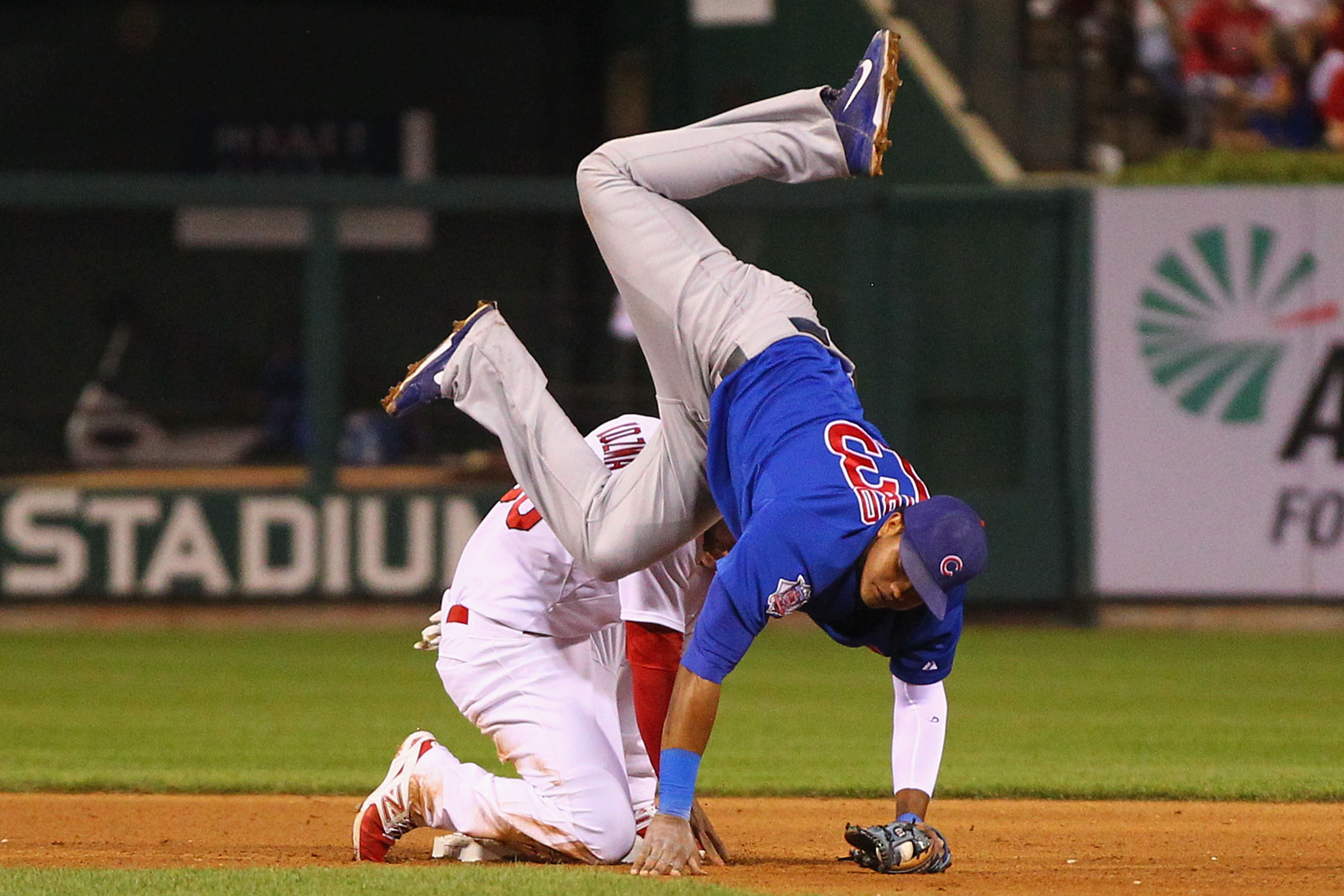 Again, Castro remains the most reliable out-maker in the National League while flashing diminished skills with the glove and on the bases. His concentration remains terrible in the field. He seemed to make a concerted effort to not swing at the first pitch he was offered this year, but still saw his walks fall along with his strikeouts. He is simply incapable of controlling the strike zone. If Javier Baez can stay at shortstop, Castro has one more season, at the very most, to prove he still deserves to be a starter in the majors. If he can't, he'll become the most expensive utility infielder in baseball history.

Castro's double-play partner was never really seen as a long-term solution at second base, but a freakishly awesome defensive season in 2012, coupled with bad hitting (as opposed to horrendous hitting) actually made him pretty valuable given he was making the major league minimum. But when you hit .208/.266/.303 (56 OPS+), it really doesn't matter how good your defense is. His terrible season and lack of any discernible upside actually make me wonder whether the Cubs are a dark horse candidate to sign Robinson Cano.

Last year, Jed Hoyer and Theo Epstein began transfusing the roster by bringing in Edwin Jackson. This offseason, they need to continue to shore up areas where they lack elite prospects, including second base and the rotation. The sooner the club is able to swap out Castro for Baez the better both for the club's overall play and for its mental health. 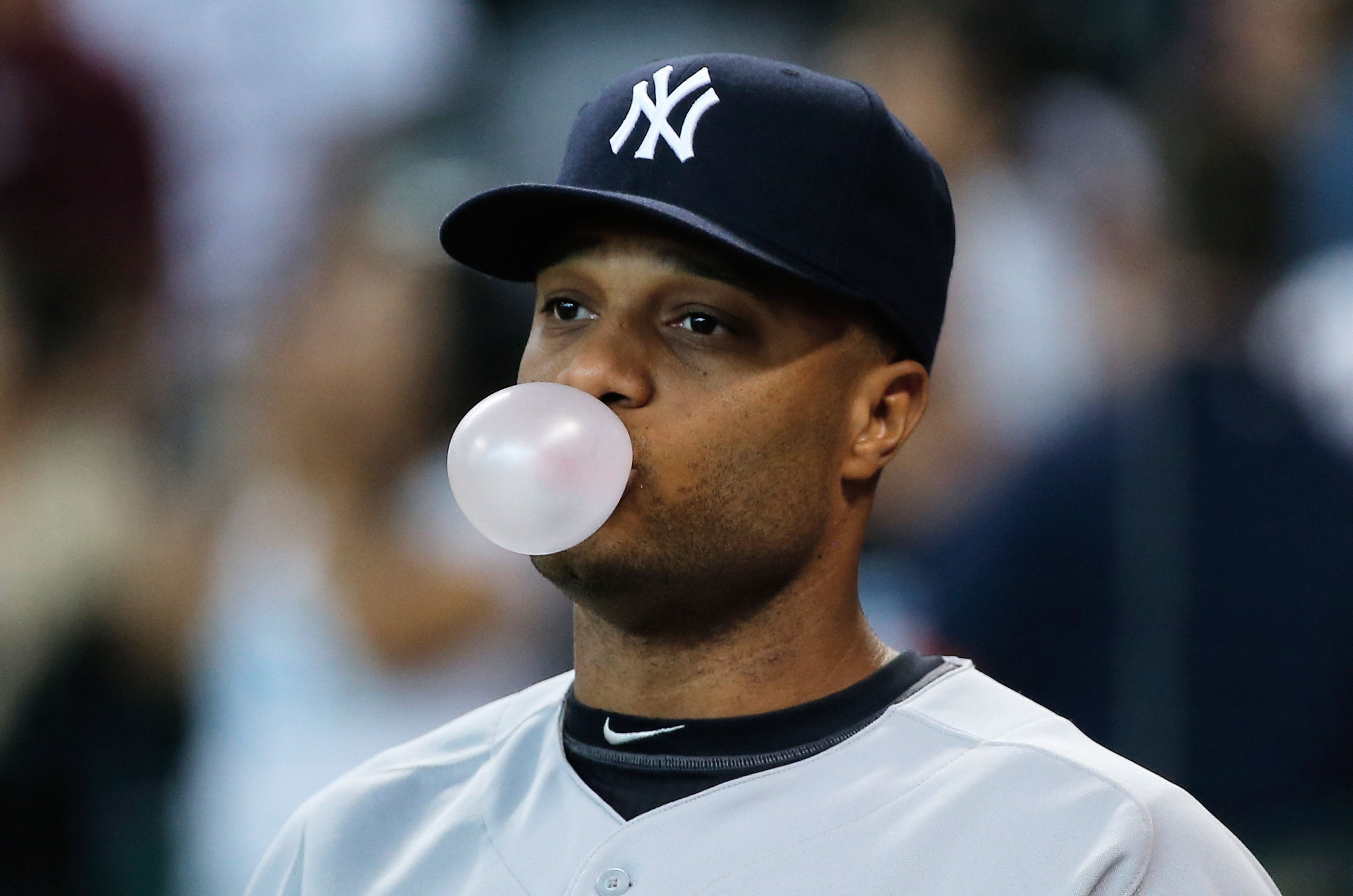 The more I think about it, the more I think Cano would make a lot of sense for this club. He's been amazingly consistent over the last four seasons, posting an OPS between .880 and .930 each year while playing 640 out of 648 possible games. He's shown an increased willingness to refine his approach at the plate and is, at worst, an average defender (two Gold Gloves notwithstanding). Additionally, he could serve a mentor to Baez and the other high-upside Spanish-speaking young players who are climbing through the Cubs system. The Cubs also only have $46 million committed to players next year, and Baseball-Reference estimates that next year's payroll, given the players on hand, will be around $75 million. That should leave plenty of room for Hoyer and Epstein to invest in a franchise cornerstone, especially given that the club's revenue is set to increase once the renovations to Wrigley Field get underway (though the timeline for that is no longer clear) and this year's TV money is distributed around the league.

That will not be enough, of course, to turn the Cubs into a winner, and it smacks of the team's high-profile failures in the past with the likes of Alfonso Soriano. Cano, however, is a fundamentally different player from Soriano. He has plate discipline, more defensive value (a good second baseman as opposed to a bad corner outfielder), and is quite simply a better hitter. Fangraphs estimates that Soriano was worth around 14 wins above replacement in the four seasons before he came to Chicago. In the last four years, Cano has been worth almost double that (25-26 WAR). Sure, Cano is likely to decline somewhat and whoever signs him will overpay, but his floor is extremely high for the next five years and is likely still that of an all-star caliber player when Baez, Albert Almora, and Jorge Soler are establishing themselves as young stars. If I had the money and the opening to play him, like the Cubs do, he'd be at the top of my wish list.