The Braves are planning build a new stadium in a suburban county outside of Atlanta.

Share All sharing options for: Braves planning move to Cobb County in 2017

The Braves are planning build a new stadium in a suburban county outside of Atlanta.

The Atlanta Braves announced Monday that the team plans to relocate to Cobb County and will have a new stadium ready in 2017, first reported by The Marietta Daily Journal.

Cobb County is a suburban county located northwest of downtown Atlanta. The new stadium will be built near the intersection of I-75 and 285, with the current site under contract and set to close in early 2014, according to the Daily Journal.

The Braves have played home games at Turner Field since 1997. Their current lease with the stadium runs through Dec. 31, 2016.

The organization has indicated publicly that they are not satisfied with the team's current stadium situation. Last year, Braves executive vice president of business operations Mike Plant told Jim Galloway of the Atlanta-Journal Constitution:

The Braves and Atlanta have discussed a plan to improve the area around Turner Field, as well as improved mass transit to help transport fans to games. Plant told Maria Saporta of the Atlanta Business Chronicle earlier in the year:

"The No. 1 impediment to why folks don't come to more games is traffic and transportation issues.That's been true year in and year out."

Braves officials met with a small group of reporters Monday to discuss the new stadium details. The club told Tim Tucker of the Atlanta Journal-Constitution that Cobb County will provide public funds toward the building of a new stadium, but did not reveal specifics.

The Atlanta Falcons are building a new downtown stadium that is expected to replace the Georgia Dome in 2016.

Update: The Braves have provided more information about the new stadium at homeofthebraves.com. The organization released a map of Braves season-ticket holders, which shows that the stadium will be closer to the majority of the fanbase: 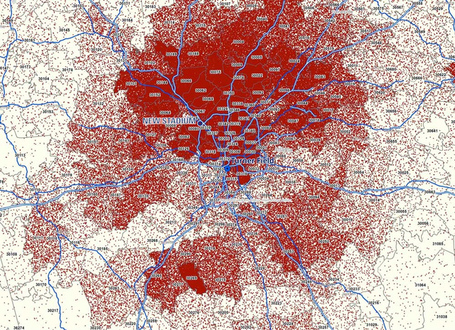 The outfield window of the stadium, however, will be a bit less scenic than the one currently found at Turner Field. Justin Bopp used the Braves stadium map and Google Earth to show what the new stadium is planned to overlook.