Why do the Braves need a new stadium?

Turner Field isn't that old, but the Braves plan to move out of the park by 2017 when their lease ends anyway.

Share All sharing options for: Why do the Braves need a new stadium?

The news has seemingly come out of nowhere, but it's happening all the same. The Braves will move out of Turner Field and into a new stadium in 2017, according to the Marietta Daily Journal and now, the Braves themselves. It's "seemingly" out of nowhere only because the Braves have been dropping hints about dissatisfaction with the location and with their current ballpark for some time now. With their 20-year lease up in 2016, now is the time to push for relocation or renovation, and the Braves decided to go big with a new home.

Remember, Turner Field wasn't originally the home of the Braves: it was an Olympic stadium re-purposed for Atlanta's MLB club. Atlanta-Fulton County Stadium was the previous home of the Braves, with the team switching over following the 1996 Olympics and the removal of huge swaths of temporary seating. That stadium was located across the street from Turner, and the Braves played in the old home from 1965 through 1996. While Atlanta has only been in Turner Field since 1997, they've been in that particular neighborhood since their initial move to Georgia from Milwaukee, when they became the first team in the South back in 1966.

Mike Plant, the Executive Vice President of Business Operations for the Braves, hinted last November about the Braves' dissatisfaction about their current location:

The ease with which the Braves could relocate to Turner, which was at least newer than Atlanta-Fulton County Stadium, even if it wasn't meant to be baseball-specific, is what kept them in downtown Atlanta even eight years after they considered leaving the county entirely. With this 20-year lease expiring, though, there is no such need nor desire to stay put out of convenience.

"Turner Field is old by modern standards," journalist Neil deMause, who runs the stadium news site Field of Schemes, told SB Nation. "It's a converted Olympic stadium, remember, and it was built in the early '90s, so it doesn't have all the bells and whistles of stadiums fresh out of the wrapper. If the Braves' lease is ending in 2016, what better time to make a push for either a new stadium or renovations?"

This is precisely how the Braves feel about the issue, as can be seen at the new webpage, Home of the Braves. From the frequently asked questions page:

"Turner Field needs $150 million in infrastructure work alone (replacing the seats, repairing and upgrading lighting, etc.), none of which would significantly enhance the fan experience.

"If the Braves were to pay for additional projects focused on improving the fan experience, the additional costs could exceed $200 million."

Money was going to be spent either way, and rather than renovate the park that's in a neighborhood the Braves haven't wanted to be in for some time, they are going all-out to build a new, baseball-specific ballpark in the area of the state they prefer over the one they've considered leaving since before Turner even broke ground. The estimated cost of the new park is $672 million, and while it could certainly climb higher as construction begins (and continues), it starts to be obvious why relocation and a park built from scratch was preferable to lengthy renovation. In addition, Home of the Braves states that the problem isn't whether or not Turner Field can continue to work as a baseball stadium today, but whether or not it can "remain viable for another 20 to 30 years." If they had chosen renovation, it might have been the last time it was needed, tacking additional future costs on top of the first necessary round in order to keep the park as modern as possible.

With that being said, deMause is skeptical. "Even if you believe the team's claims, adding all the luxury suites, restaurants, ad boards, etc., that the Braves want to Turner Field would cost $300 million or so. That's still cheaper than $672 million. Unless this is at least half public money, I don't see how it makes sense for the Braves." Cobb County is reportedly going to contribute to the costs of the new stadium, and while no details have been released in terms of how much they're going to help, considering deMause's statement, it's likely a substantial handout.

To be fair to the Braves, a new stadium built with today's modern amenities -- and we don't mean a Waffle House on the concourse -- is more likely to remain viable over the next few decades than a park that wasn't built for the purposes of baseball. MLB clubs have tried -- and mostly succeeded -- to remove all multi-sport venues from their ranks, or, at the least, have made sure that a stadium that hosts other sports and events is baseball first, rather than just part of what the park is capable of.

That's more important than being able to build around the park in the way the Braves might want to. While this map from Home of the Braves shows off plenty of areas to build parking lots for the as-of-yet unnamed successor to Turner Field... 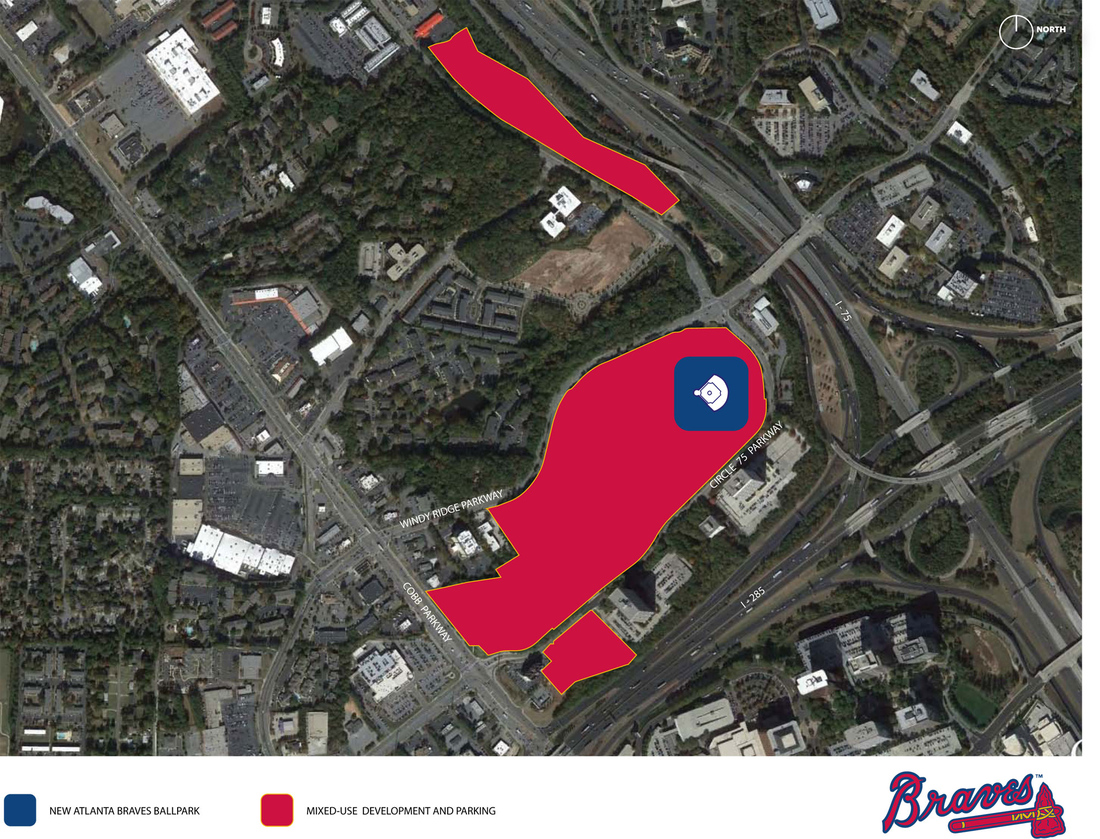 ...Turner itself is drowning in a sea of parking lots. Location has more to do, in theory, with where fans are coming from than anything else, as Plant stated last November.

It will be difficult to know just why the Braves did this until we know how much they are actually paying for their new home in Cobb County. Had they renovated Turner, it's unlikely they would have spent all their own money on it. Plant said as much in April, when he stated that "funding for the stadium development would come from a variety of sources, including city, state and federal tax incentive programs as well as the Braves organization." When we know just how much the Braves have raised without going to their own pockets, we'll have a better sense of just how good of a deal this is for them. For now, all we know is that the first of the 1990s baseball stadiums is in line to be replaced, and that the words "modern"  and "world-class" have shorter shelf lives than we might have realized.