Peter Gammons' goof, and things Alex Rodriguez does not resemble

Some men just want to watch the world burn. Alex Rodriguez is not really one of those men, Peter Gammons' brain fart notwithstanding. Do we really need to talk about all this?

Share All sharing options for: Peter Gammons' goof, and things Alex Rodriguez does not resemble

If you have to talk about Alex Rodriguez's ongoing labor grievance with Major League Baseball -- and if you are a sports talk radio host on New York City's 98.7 WEPN, you do need to talk about that -- you could do a lot worse where guests are concerned than Peter Gammons. It's not that there's anything new to say, really, about A-Rod storming out of his hearing earlier this week, or about what A-Rod is going for with his recent Eugene V. Debs As Interpreted By A Buff Android theatrics, or about what A-Rod is ever really trying to do. But if you need someone to say some things about A-Rod, Peter Gammons -- a Hall of Famer who famously interviewed A-Rod about performance-enhancing drugs, and clearly cares a great deal about baseball -- would seem to be a good person to say those things.

Yes, it would seem that way. So:

Well, that didn't go very well at all! But it did at least go quickly. After host Mike Lupica spent 40 seconds (accurately) describing his guest's career bona fides, Gammons drops an "it's all about the money" -- the sort of strong take that usually comes from callers identified by their first name and the town on Long Island from which they're calling -- before swerving, of his own volition, into some strange and swampy territory. "I've had people with the Yankees say this to me," Gammons says at 1:10 above, "he (Bane A-Rod) is just, he wants to blow up the world." There's a pause, then, during which we might imagine that Gammons is considering what to say next. Or not considering it, because what he came up with was, "he's like the marathon bombers. He's gonna get them and ..."

And then some stuff about failed drug tests and Lupica opens what sounds like a Twix right next to the microphone and let's circle back to that bit about how Alex Rodriguez is like a pair of deranged nihilists who tried their best to murder hundreds of innocent people with bombs.

It should be noted that this is possibly not the dumbest bit of apocalyptic hyperbole directed at A-Rod. Back in July, Bill Madden, a columnist for the New York Daily News and pioneer in the field of Rodriguez-related overstatement, compared A-Rod to Whitey Bulger, the sadistic Boston mobster who is known to have tortured and murdered at least 10 people. Madden made that comparison because A-Rod was "baseball's Public Enemy No. 1," which is lazy and deeply dumb. Gammons himself seems not even to understand where this comparison came from.

@craigcalcaterra It was a stupid, poorly worded comp of blowing up a process.Alex would never hurt a human . I hope I haven't hurt him

Which is a pretty good apology, honestly, and about what you'd expect from one of the more universally revered humans writing about sports. But if it's probably wise not to parse a sexagenarian's on-air brain fart too finely, there's still some significance here to find, in the context if not in the comment. 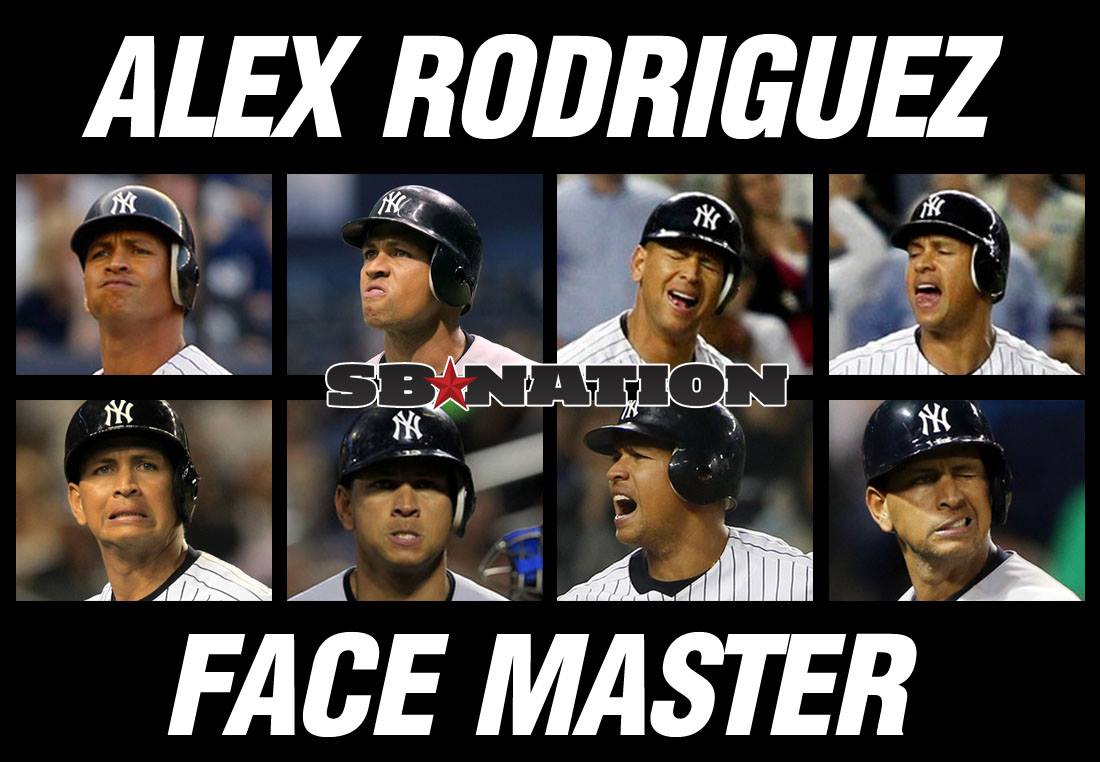 If Alex Rodriguez is suspended, baseball fans will be robbed of one of his greatest gifts: the strikeout face.

On Wednesday afternoon, Gammons tweeted a link to a post headlined 5 Reasons You Should Root For A-Rod, which ran on his fledgling and faintly Angelfire-ish baseball site, Gammons Daily. It's a fairly dry post, with little a)'s and b)'s under numbered points laying out the specific instances of overreach in MLB's case against A-Rod. This is what A-Rod walked out of when he walked out of that arbitrator's office, and if there's something ridiculous about Rodriguez's attempts to paint himself as a labor hero -- imagine Sally Field in Norma Rae, but looking up at a self-commissioned painting of herself as a centaur -- it's also true that he has collectively bargained rights, and that Bud Selig's office certainly seems more interested in punishing A-Rod than honoring those rights.

Anyway, you know all this, but the point is that there is interesting stuff to talk about here -- a complicated story with a bunch of other, smaller, similarly interesting stories within it. It might be that sports radio is not the place to go into those fine points, although I'm not exactly sure why that needs to be -- just because much of sports radio is a place where soul-goateed hamsteaks grump heroically about Man Stuff doesn't mean it necessarily has to be that.

It also might be that Peter Gammons, sunny establishmentarian generalist that he is, is not the guy to go into the fine points of this particular story, or really any story. National baseball writers have a purpose, and that purpose is Make Baseball Sounds about a wide array of baseball-related topics; Gammons throws in the ability to make sounds about dad-rock, as well, free of charge. He generally does all this fairly well and in an endearing way.

There's clearly a diminishing return on hyperbole as a way to talk about sports and politics and anything else.

But, at some point -- and not just when it leads to towering biffs like comparing the greatest power hitter of his era to domestic terrorists because both have little respect for traditional institutions -- there's clearly a diminishing return on hyperbole as a way to talk about sports and politics and anything else. It's not just that it coarsens and polarizes and dumbs down and louds-up, turning conversations into dueling banjo take-offs, although there's also all that. It's that the defiant serving up of all these piping-hot takes doesn't actually offer much in terms of entertainment or illumination, let alone enjoyment.

Peter Gammons misspoke, and is sorry about it. But he was trying to speak a language that isn't really his own -- he's not naturally a dudgeon master like the whiskey-lunged doofs hosting "Sportsblurt with Toiletman and the Beav" shows on AM stations nationwide. Gammons is a Buffalo Tom fan who likes baseball a lot and has followed it for a long time. Let him talk about baseball, and things will probably be fine. But he's no more at home speaking Sports Talk Radio than any other functioning human. This is a dumb and unproductive way to speak about things -- stilted and kayfabe-ish and uninformed and false, too angry and otherwise too much. A-Rod is a complicated case himself, and his present situation is knotty and weird and interesting to think about. Couldn't we just talk about that?