Two teams deal players who have been slowed by injury and pushed aside by others.

The Los Angeles Angels have traded outfielder Peter Bourjos to the St. Louis Cardinals in return for third baseman David Freese. The Angels also acquired 28-year-old right-handed reliever Fernando Salas in the deal, while the Cardinals will receive 21-year-old minor league outfielder Randal Grichuk to round out the deal.

Should Freese be the return, the deal will represent a swap of two teams filling a need by dealing from excess. Freese, 31 years old in April, is a career .286/.356/.427 hitter who has frequently been slowed by injury. This year he hit only .262/.340/.381 and, unlike in 2011 when he was named the World Series MVP, he failed to compensate with strong postseason production, going 10-for-56 (.178) with one home run. As he's also an anodyne defender, a slumping Freese is close to a replacement-level player.

Even had Freese hit, the emergence of Matt Carpenter as a superior top-of-the-lineup threat, combined with the maturation of top second base prospect Kolten Wong, would have rendered him surplus. Carpenter, who came up as a third baseman, was stretched defensively at the keystone. His bat will still play at a position more congenial to his skills, while Wong should provide above-average production and at least solid defense at second. Due to the team's infield logjam, Wong was a non-factor after his August recall, but he's a career .301/.365/.446 hitter in 280 minor league games, including .303/.369/.466 at Triple-A Memphis in 2013.

Freese, who is eligible for arbitration this winter, made $3.15 million this season. He'll be asked to patch an Angels third base position that has been soft since the heyday of Troy Glaus and Chone Figgins. Alberto Callaspo held the position for most of the last three seasons before being traded to the Athletics on July 30. A converted second baseman, Callaspo hit .263/.336/.356 as an Angel. The Angels also utilized Luis Jimenez, Chris Nelson, Austin Romine, Brendan Harris, and Thomas Field at third. Angels third basemen hit just .246/.304/.333 with eight home runs this year.

Bourjos, 26, drew raves for his incredible range in the outfield when he reached the majors in 2010, and though he wasn't supposed to have much in the stick department, he hit very well for a player of his defensive ability in his first full major league season, averaging .271/.327/.438 with a league-leading 11 triples. Since then, he's had a hard time staying in the lineup. In 2013, he was limited to 55 games and 196 PAs by a thigh injury and a broken wrist that required surgery.

In addition to the continued excellence of Trout in center, the Angels have bats who profile better than Bourjos in a corner, including former American League MVP Josh Hamilton and rookie Kole Calhoun, a 25-year-old who hit .282/.347/.462 in 58 games. Bourjos, like Freese eligible for arbitration, was paid $512,500 by the Angels this year. 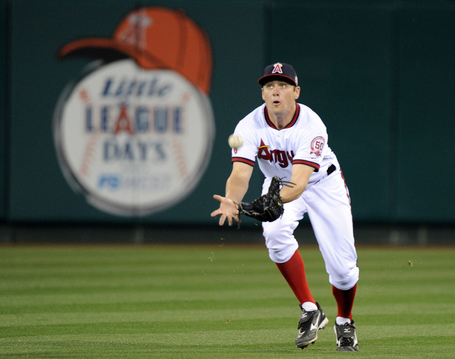 The postseason showed that outfield defense was a major problem for the Cardinals this year. Jon Jay is stretched to cover center field, while wingmen Matt Holliday and Carlos Beltran are slowing down. Beltran is expected to depart as a free agent. While his playing time is expected eventually to devolve upon top prospect Oscar Taveras, a ,320/.377/.518 hitter in 374 minor league games. However, Taveras missed most of the season with an ankle injury and may not win a job right out of spring training. Bourjos gives the club the depth necessary to give Taveras whatever time he needs.

Allen Craig may also see more regular time in the outfield corners to make room for Matt Adams at first base. 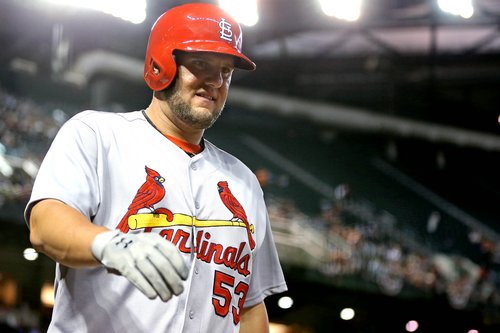 Salas, who has briefly the Cardinals' closer in 2011, has struggled with both injuries and ineffectiveness in recent seasons, being demoted to Memphis in both 2012 and 2013. He also dealt with right-shoulder inflammation this year, pitching just 27 games with a 4.50 ERA. Overall he has a 3.42 ERA in 187 career games, striking out 186 and walking 69 in 192.1 innings.

Rate this deal a big win for the Cards. At his present level of production, Freese is just a guy, an increasingly expensive one to boot, and Salas is a fringe reliever who had been displaced by better arms. It's hard to know what Bourjos has to offer given a limited track record and two years of relative inactivity, but the worst-case scenario is that he's the most well-qualified fourth outfielder in the game and an upgrade on the likes of Shane Robinson and Adron Chambers. Grichuk has more work to do to master the strike zone before he can make a strong claim on a major league right field job, but he gives the Cardinals yet another option with which to stock their outfield, one with above-average power potential. They gave up nothing they needed and got younger in return.