The Cardinals get a tremendous upgrade at shortstop. The only questions are how good he'll be and how long the good years will last.

Cast your mind back over the entire history of the St. Louis Cardinals, contender for greatest franchise in baseball history. From 1900 on they have won 19 National League pennants and 11 World Series championships. Now think of the shortstops who have propelled those victories. Many of us will remember the artistry of Ozzie Smith, a few more the lapidary glove-work of Dal Maxvill in the 1960s. Those who know their history will have heard of Marty Marion, a terrific glove who won the 1944 NL MVP award purely for fielding excellence. Maxvill couldn't hit at all. Marion wasn't an automatic out, but spent most of his career at the bottom of the batting order. With walks, high-percentage base-stealing, and the occasional good batting average, Smith was a deceptively productive hitter at times, but no one ever mistook him for a middle-of-the-order hitter. Cardinals shortstops, almost without exception, have been mainly about the glove.

Parenthetically, note Peralta's home-road splits during the Tigers years. He hit a robust .296/.349/.468 at pitcher-friendly Comerica Park, but just .256/.315/.399 on the road. That's the opposite of what you might have guessed, and there's no good reason for it; truly, Peralta is designed to confuse and sometimes frustrate.

An additional consideration here is that defense is not Peralta's calling card. He's a husky guy for a middle infielder, with the slightly bulbous shape of a barrel or a beer bottle. His listed weight of 215 pounds is towards the top of the current group of shortstops (Hanley Ramirez has 10 pounds on him, while Brandon Crawford and Troy Tulowitzki check in at the same weight; everyone else carries less luggage). He's not fast now and at 32 he's only going to be getting slower. The Indians pushed him to third base; the Tigers, after Jose Iglesias had been acquired during the Biogenesis vacation, pushed him to left field. Peralta might or might not hit, but it seems a near-certainty that within a couple of years he's not going to be up to the defensive end of his job. For all the offensive opportunities he might, might convert that Pete Kozma or another shortstop might have punted on, it's possible that fans will watch enough grounders just get "past a diving Peralta" (a phrase with which we Derek Jeter-watchers have become painfully familiar) that they might start to wonder if the Cardinals tradition of good-field, low-hit shortstops was so bad after all. 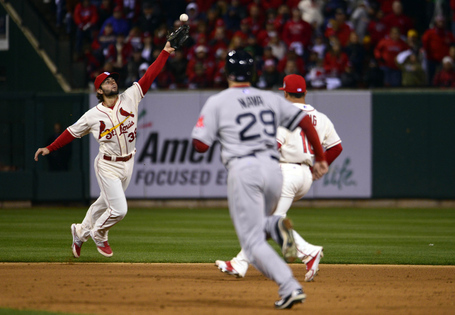 I'm not going to spend a lot of time analyzing the financial component of the deal; it's clear that one of the effects of the game's flush financial state is inflation. When this winter has ended, we should have more of a sense of where teams' new financial boundaries lie. For now, we need to check our hysteria. When tempted to say, "How could they pay that much for him?" don't. They could pay that much because they wanted him and they had a lot more money than that. Will there be a subsequent opportunity cost to tying up so much dough in a player with a probable shelf-life shorter than a pack of Twinkies? Probably, but for now we really don't know.

In the short term, though, Peralta almost has to be an upgrade. At his worst he's still a better hitter than Kozma, and his range isn't so bad, at least right now, that he's going to give back enough runs on defense to negate the improved offense. Kozma hit only .217/.275/.273 this season, and as the postseason suggested, not only is he a poor hitter (he went 1-for-25 in the last two rounds), but he's a gloveman whose glove is not all that special. Peralta might give the Cardinals only two good years, however the heck you define good where he's concerned, but anything in his range of possible outcomes still falls in that expansive territory that is "Better than Kozma."

Peralta had no draft-pick compensation attached to him, so his signing does nothing to retard the minor league operation that has kept the team fueled with high-power arms like Michael Wacha. The only thing at risk is money, and in a world where money has no meaning, you can always spend more of it. Nor are the Cardinals prevented from revisiting trade talks for Tulowitzki or any other attractive shortstop in the future, when partners might be more amenable to making a deal.

We've made scant mention of the Biogenesis angle here. To believe that Peralta's hitting was affected in one direction or another by whatever radioactive goo Anthony Bosch sent his way is to (a) profess more faith in the competency of "Dr." Bosch than is supported by the facts; (b) infer more in the way of an effect than is probable from any clinical understanding of said goo; (c) have more confidence in one's predictive powers than Peralta's scattershot record can possibly sustain. He might have one of the best offensive seasons by a shortstop in Cardinals history just by showing up. He might be mediocre. Whatever the case, it will have nothing to do with Biogenesis.

In many ways, this deal is not dissimilar to the one the Yankees just made with Brian McCann. In the short term it's a massive upgrade on the incumbent (Chris Stewart instead of Pete Kozma). The long-term outlook is hazier. Check back in two years, when the Cardinals will probably have another couple of extended October runs under their belt. At that point, if Peralta has begun to fade, no doubt they'll happily adjust once again.